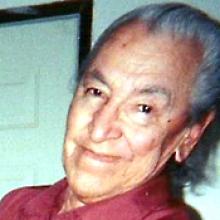 NORBERT MICHEAL GUIMOND June 6, 1940 - April 7, 2016 It is with a heavy heart that we announce the passing of our husband, father, brother uncle, grandfather, godfather, Baba and friend. Norbert was born in Fort Alexander, the youngest son of Sylvester and Caroline Guimond. He married Rose the love of his life on December 4, 1965. They just celebrated their 50th anniversary. Through their love they had four children: Micheal, Carol (Chris), Wanda (Hank) and Claudette. His other true loves were his grandchildren Cara, Karl, Sandy, Jon-Pall, Mikayla, Liam and Zayden. He also had the joy of watching Kale, Andrew, Lois, Cori, Lyndon, William and Aliyeh, grow from infants to respectable youth. He also leaves his surviving family Rita, Annette, and Elaine, brother Percy (Rose), his sister Corrine, in-laws Stanford (Lillian), Morris and Agnes, and special goddaughters, Tara and Jillian. He was predeceased by his parents Sylvester and Caroline, brothers Jean Baptise, twin Robert, sister Margaret, special grandson Leander, his in-laws Lizzette and John A., Richard, Paul, Ron, Leona and John and Helen. He will be remembered for his musical talent as he was a member of the TROUBADOURS. As a young man he travelled all over Canada. He was always supporting others at wakes and funerals. He will be greatly missed by all that have had the privilege to have known Norbert. Wake Service is being held from Friday, April 8, 2016 to Monday, April 11, 2016 at the St. Alexander Roman Catholic Church, Sagkeeng First Nation, MB. Funeral Service will follow in the church, Monday, April 11, 2016 at 2:00 p.m. Interment will be held in the church cemetery. The family would like to thank the staff at GH4, CCU at the Health Sciences Centre and the Sagkeeng Health Centre for all of their support and care for our dad. Condolences may be sent to the family c/o Spirit Road Funeral Services Inc., PO Box 200, Fort Alexander, MB, R0E 0P0, 204-340-6490 or friends may leave a message of sympathy at spiritroadfs@shaw.ca