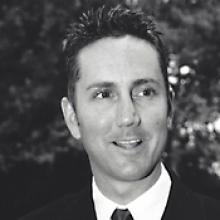 ROBERT (ROB) ALEXANDER RENNIE Born in Winnipeg, MB on July 6, 1968 - Died in Brandon, MB April 11, 2016 Rob's adventure began in Manitoba in the summer of 1968, growing up between Winnipeg and Pinawa, MB, with a brief time in London, ON. Being active was an integral part of Rob's life, beginning when he was young. He enjoyed playing baseball, hockey, and camping in the summer across Canada. Most of all, he enjoyed making memories with his cousins at Oak Lake beach (Walton's/Gompf's) and at the Whiteshell (Rennie's). Graduating from the University of Manitoba in 1996 with his Bachelor of Arts, Rob continued his thirst for knowledge in Brandon, graduating from Brandon University in 2000 with a Bachelor of Education degree. It was during his time at Brandon University where Rob was blessed with meeting Denise. They were married on July 26, 2003. Rob and Denise enjoyed married life as a two-some and had many adventures together until December 3, 2009 when their lives were forever changed with the arrival of their son, Ryan Kenneth Rennie. Rob's working career was a busy road with many side streets. Most notably, his main profession was as a teacher, not just here in Canada, but overseas as well. Truly, Rob was an educator, instructing both adults and children in many facets of life. Rob's cross section of jobs included working as an orderly at the Victoria General hospital, cross country ski instructor, car sales man, business entrepreneur, and more. Helping others was something Rob enjoyed and this was evident not just in day-to-day life, but in the large amounts of time he committed to associations such as the Lions Club and to Special Olympics. Rob's love of travel and sports was a constant in his life's adventure. He enjoyed and tried nearly every sport, perhaps fencing and chess were the only two he missed. Regardless of their statistics, the Winnipeg Jets are the best hockey team in Rob and Ryan's book. Rob proudly biked his way across Ontario, just for fun, thrived on Ultimate Frisbee competitions, and played hockey in every country he traveled to if the opportunity presented itself. He loved to talk and network with everyone, everywhere, and his countless friends around the world are evidence of that. Rob loved romancing his wife and faithfully devoted time to both his son Ryan and all of his nephews. Rob's journey on earth ended on April 11, 2016 at Dinsdale Personal Care Home at the young age of 47. His memory will be honored by his beloved wife, Denise (nee Liske) Rennie and loving son Ryan Rennie; his much-loved sister Sharon (husband Ed, sons Nathan (Tressa), Colin, Gavin, and Teagan) Simon; and his parents Jean and Ron Rennie. Rob will be missed greatly by Denise's family including her mom, Gloria Liske, and the Liske brothers Dwayne (Crystal, children Deagan and Chaydin), Darren (Erin), and Dale (Lori, children Nicholas and Jaxson). He was predeceased by his father-in-law, Ken Liske in 2005. Rob also has many, many friends and extended family members who will continue to keep his spirit alive with them during adventures to come. The Celebration of Rob's Life took place at Memories Chapel on Friday, April 15, 2016 with Lydia Glawson, Funeral Celebrant officiating. A private family committal followed at the Brandon Cemetery. Donations in memory of Rob may be made through any Westoba Credit Union, for an education trust fund for his son Ryan. Please make cheques payable to Ryan Rennie in Rob's memory. Expressions of sympathy may be made at www.memorieschapel.com. Arrangements with Memories Chapel, Brandon, 1-855-727-0330.