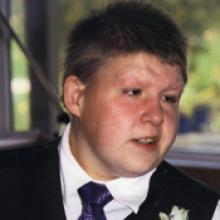 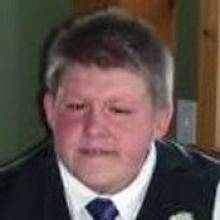 KEVIN JEREMY DYCK On Friday April 15th, 2016, Kevin Jeremy Dyck (32 years) peacefully passed away in his sleep while safe at his home in Roland Manitoba. Kevin is survived by his parents Harold and Lesia Dyck; siblings, Ryan (Kailey) nieces Charli and Sloan, Vanessa (Nicholas) nieces Mya and Hailey and nephew Zachary, and Matthew (Nadine), Baba Olga Skochelias, many aunts uncles and cousins. Kevin was predeceased by Grandma and Grandpa Annie and Anton Dyck, Dido John Skochelias. Kevin was born on January 23rd, 1984 in the city of Winnipeg, province of Manitoba, however grew up in the small town of Lowe Farm. Not four years of Kevin's life had passed when he was diagnosed with Prader-Willi syndrome. As he grew older he developed multiple other health issues. This had a great effect on Kevin's development and growth when placed among peers, however, he grew a heart larger than most that cared for his family, friends, and the things he loved. Early in life Kevin enjoyed riding his bike down to Shannon's creek, jumping on the trampoline and caring for the many animals that entered his life. Kevin's passion for traveling started when his grandpa Dyck took Kevin on many adventures across Canada. Kevin's time with us was brief but his impact on many was immense. Kevin took great interest in people. It didn't matter weather it was the first time speaking with you, he genuinely cared when asking one of his many questions. Kevin was intelligent, charismatic, thoughtful and an avid listener who never forgot any detail no matter how small. Kevin's priority in life was family whether it was his brothers, sisters, nieces, uncles, cousins, baba mom or dad. Kevin would put their needs and interests before his without hesitation. Kevin cherished every single moment that he spent with his three nieces and nephew. Kevin's favourite place to be was the sunflower gardens cheering on his brothers and his favourite team the Altona Maroons. While at the rink he would say hi and have a conversation with as many as he could. Kevin didn't not judge on the team you cheered for, everyone was equal to him. Kevin and his dad spent many hours in a car traveling to rinks across Manitoba. Kevin graduated from Morris high school, and continued to live with his parents outside of Kane. For the last four years Kevin lived in Winnipeg where he was able to experience life on his own with support. As Kevin's health began to deteriorate he spent 10 months in the hospital before moving home for the final three weeks of his life with his family, dog Lola, and cats. Funeral service will be held at 2:00 p.m. on Tuesday, April 19 at Lowe Farm Bergthaler Mennonite Church. Viewing will be held at Wiebe Funeral Home, Winkler on Tuesday morning from 9:00 to 11:00 a.m. and at the church prior to the service. Interment to follow at the Lowe Farm Cemetery. In lieu of flowers memorial donations may be made to the Pembina Valley Humane Society.
Publish Date: Apr 18, 2016

KEVIN JEREMY DYCK 1984 - 2016 It is with great sadness that we announce that Kevin Jeremy Dyck, son of Harold and Lesia Dyck of Lowe Farm, MB passed away peacefully Friday morning April 15, 2016 in the safety of his home. Full obituary to follow. Wiebe Funeral Homes Ltd. In care of arrangements, 204-325-4201 wiebefuneralhomes.com
Publish Date: Apr 16, 2016