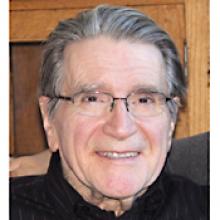 REGINALD ROBERT SKENE Reg Skene passed peacefully on Tuesday, April 19, 2016. He was 82 years old. Reg was predeceased by his wife, Annette in 2005. He is lovingly remembered by his five children: Cathy Stephens (Alvin), Rick Skene (Janice), Anita Skene (William Rhoda), Robert Skene (Kirk Williams), Craig Skene (Maria Pavao-Skene); and by his grandchildren Daniel (Jenny), Sean, William, Brett (Danielle), Leanne, Bradley, step great-granddaughter Kalia and brand new great-granddaughter Brooklyn Annette. His grandson William recounts the special relationship Reg had with his grandchildren: "Reg was a pillar in his grandchildren's lives from the day of their birth to the point of his passing. Forever ready with sage advice and open ears, his unconditional love and absolute absence of judgment allowed him to transcend generations and foster a friendship with his grandchildren in a way that few grandparents could." The family would also like to especially thank Reg's friends Brian Bjorklund and Norm Matthews, whose unending love and support for Reg through good times and tough times has shown us the true meaning of lifelong friendship. Born in Oxdrift, Ontario, Reg remained intensely proud of his Northwestern Ontario roots. Tom and Alta, Bill and Lil, Aunt Olive and family always had a special place in his heart. He would puff with pride at the mention of his nephews Jack, Dale, Bill, Blair, and Calvin. Reg was also very close to Annette's large extended family whose continual messages of support and love for him were greatly appreciated. Aside from his rich and appreciated life as a husband, father, grandfather, and friend, Reg was a devoted teacher and scholar. He wrote an important and influential book on the plays of the Irish poet and playwright William Butler Yeats. His doctoral thesis focused on the history of professional theatre in Winnipeg. This intellectual depth was often reflected in his theatre reviews for the Winnipeg Free Press and the CBC. He was hired in 1966 by United College to teach a single drama course and work to create a theatre department. As Director of Theatre, Reg expanded and built that single course into the current fully rounded program that has become the University of Winnipeg Department of Theatre and Film. Many of its graduates form the core of Winnipeg's performing arts community and speak fondly of Reg's ready laugh, piercing intellect and eagerly recount the important part he played in helping to propel them into successful, professional careers. This is Reg's true legacy. The passion and wisdom he shared as a teacher lives on in his former students and continues to nurture theatre throughout the country. The family would like to thank the management and staff of River Park Gardens for providing a warm and caring home for Reg in his final difficult year. Reg genuinely loved the kind and attentive staff. As per Reg's wishes, there will be no public memorial service. The immediate family gathered on Friday afternoon for a private service where he was laid to rest beside Annette. In lieu of flowers, anyone wishing to make a donation in his memory may do so to: The Reg Skene Award for Emerging Theatre Artist, through the Manitoba Association of Playwrights. Please go to the Canada Helps website: https://www.canadahelps.org/en/ charities/manitoba-association-of- playwrights/#donate_now Or more simply, go hug a teacher.