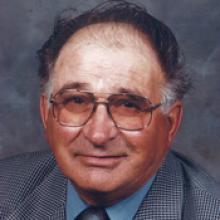 WALTER WILFRED MICHALCHUK Walter Wilfred Michalchuk, of Russell, Manitoba, passed away on Thursday, April 28, 2016, at the Russell District Health Centre, at the age of 89 years. Walter is survived by his children: Sandra (Bob) Fleury, Elva (Richard) Durawa, Pat Michalchuk (Tracy Woywada), Janet (Michael) Rawlyk and Lisa (Loren) Zaleski; as well as nine grandchildren and three great-grandchildren. Prayers will be said on Monday evening at 7:00 p.m. from St. Mary's Ukrainian Catholic Church, Russell. The funeral service will be held on Tuesday, May 3, 2016 at 10:00 a.m. from St. Mary's Ukrainian Catholic Church, Russell with Father Mykhaylo Khomitskyy officiating. Interment will follow in the Russell Memorial Gardens. If friends so desire, donations may be made to the Expanding Cancer Care, in care of Banner County Health Foundation. Remembrances and condolences can be e-mailed to braendlebruce@mts.net. Braendle-Bruce Funeral Service of Russell, Manitoba (204) 773-2747 in care of arrangements.