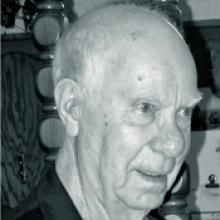 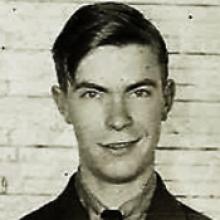 EDGAR (ED) THOMAS DUFFY April 1, 1923 - May 1, 2016 Peacefully, with family by his side, our Dear Husband, Dad, and Grandpa passed away on Sunday, May 1, 2016 at the age of 93. He will live on in the hearts of Eileen, his wife of 66 years; son Terry (Marie); daughters Laura (Mike) and Linda (David); and grandchildren Steve (Connor), Shauna and Erik. Ed was predeceased by his parents, Edward and Mary, sister Kathleen, and brothers Jim, Bill, Maurice, Frank, Charles, Ken, Leo and Al. Ed was born in Lanigan, Saskatchewan and spent his formative years growing up in Rosthern, Saskatchewan. He enlisted in the RCAF in 1942 and served overseas in the U.K. On his return in 1945 he settled in Winnipeg where he met and married the love of his life in 1949. Ed and Eileen raised their family in Fort Garry. Ed worked with Canada Post for 38 years. Ed enjoyed sports, especially curling and golf. He was a longtime member of the Fort Rouge Curling Club and represented Manitoba in the 1968 National Postal Employees Curling Classic. He was an avid Jets fan and enjoyed sharing his season tickets with family. Ed especially enjoyed spending time with his grandchildren. In later years, he spent many hours watching curling, hockey, baseball, tennis, and other sports. He was not bashful about providing his advice on curling strategy to the teams he watched on TV. Edgar was also a history buff and enjoyed travelling with Eileen. The family would like to thank the staff at the Victoria General Hospital for their kind and compassionate care. In lieu of flowers, donations can be made to the charity of choice. A private service has been held at Assumption Cemetery, 3990 Portage Avenue. For those who wish to sign the online Guest Book please visit our website. Chapel Lawn www.chapellawn.ca 204-885-9715