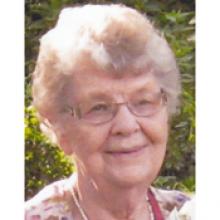 JOHANNA (JENNIE) KUTCHER (nee JOHNSON) 1921 - 2016 With sadness the family of Johanna (Jennie) Kutcher announces her peaceful passing on May 14, 2016. Mom was born to Nils and Selma Johnson of Erinview, MB, on April 9, 1921. She was schooled in Erinview and worked with her parents and brothers on the family farm until Dad entered the scene to teach in the Erinview district in 1939 and swept her off her feet. They were married on April 4, 1942 and shared over 71 years together before Dad passed away in 2013. Mom was predeceased by our Dad, Peter Kutcher, her parents, her two brothers and four sisters, her son-in-law Chester Mapstone, and her daughter-in-law Pam Kutcher. She is survived by her children: Doreen (Gary Hubbell), her son Jack Mapstone (Sue) and their children Brooke and Letesia; Thelma Hitchen (Bob), their sons David Hitchen (Pam Vialoux) and their daughter Juniper, and Kevin Hitchen; Audrey Bloomaert (Ray), her son Christopher Hallick (Tara Jones) and his children Amanda, Kassie, and Michael Hallick, her son Joel Hallick (Noreen), and her daughter Jennifer Hallick-Murray (Charles Murray) and their son Ulysses; Anita Krushel (Garry) and their daughter Lindsay Livingston (Ian); Paul Kutcher (Shannon), his daughters Jessica Forsman (Cody) and Casey Kutcher, and Shannon's children Katy, Tom and Jane Unruh; John Kutcher(Debbie McMillan); Dad's three sisters, and many nieces and nephews. After six months of marriage, Mom returned to the family farm where she stayed for three years while Dad went overseas to do his part in the Second World War. When he returned, they moved to Cloverdale, near Selkirk, MB, where Dad began his teaching career. Subsequently they lived in the communities of Oakner, Plum Coulee, Cypress River, Austin, and lastly Morden, where they remained in their family home for 48 years. During these years Dad taught school and worked hard to further his education, while Mom worked hard to care for the six children that made up the family unit. She cleaned, cooked, gardened, preserved, sewed, and provided lots of TLC as needed. She took an interest in and supported the various interests that each child pursued. Mom did not have the opportunity to pursue higher education, but she encouraged each of her children to strive for their goals. She was a great cook and baker, and for several years worked voluntarily in the church kitchen for events and cooked at children's camps, making sure that her meals would be nutritious and appetizing. When she was 56 she got a job cooking at a local restaurant in Morden where she worked for several years until health issues forced her to retire. Mom was naturally musical, as were her dad and several of her family members. She played the violin by ear, and would from time to time play with her brothers and Dad, who accompanied her on their guitars to play for small town country dances. Later she played at home, and occasionally played hymns at church. During the years in Morden, Mom became active in helping out the community by receiving and distributing used clothing at their home, and later was involved in a committee that helped move the activities out of the house and helped set up and operate the Thrift Shop in town to serve the needs of the community. Over the years Mom tried her hand at several types of handwork, sewing clothing for the family, knitting, making quilts, hooking rugs, and stitching some decorative pieces. She was a real recycler; many plastic bags were saved from the environment and turned into hooked rugs, baskets, sun hats, etc. In her last years after Dad was gone, she resumed her knitting as a pass time and created a few dozen pairs of mittens to give to children in need. Mom's legacy is her love and appreciation for her family. These were the last thoughts on her mind that she shared with us in the hours prior to her passing. Rest in peace, Mom. Funeral service will be held at 1:00 p.m. on Wednesday, May 18, 2016 at Wiebe Funeral Chapel, 1050 Thornhill St. in Morden with interment at Hillside Cemetery. Viewing will be from 12:00 p.m. until 1:00 p.m. prior to the service. If friends so desire, donations may be made in Jennie's memory to World Vision Canada or to the charity of one's choice. Wiebe Funeral Chapel, Morden In care of arrangements 204-822-4755 wiebefuneralhomes.com