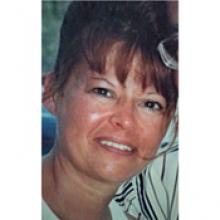 GISELE LOUISE MARIE MARION (née GAGNE) 1954 - 2016 It is with great sadness that we announce the passing of Gisele Louise Marion, wife, mother, grandmother, sister and aunt on Tuesday, May 17, 2016 at the age of 61. Gisèle will be forever loved and missed by her husband, René and her children, Eric (Brigitte), Dean (Thasha), Michel (Lisa), Colleen; and grandchildren, Chloe, Cody, Colin, Andon, Danica, Tristen, Tyler and Aria. She will also be missed by her mother, Cecile Gagné and siblings, René, Lisette (Denis), Carmel (Lucien), Monique (Kelly), Marc (Daisy) and Chantal (Bob) as well as extended family and friends. Gisèle is predeceased by her father, Benoit Gagné and stepfather, Jean-Louis Coutu. A Celebration of Life in honor of Gisèle will be held Monday, May 23rd, 2016 at 1:00 p.m. at the Cabane à Sucre, 432 Joubert Street, Saint-Pierre Jolys, Manitoba. We would like to thank the staff at Boundary Trails Health Center in Winkler, MB, for their care and compassion during the past two years. In lieu of flowers, donations can be made in her honor to a charity of choice. "Always remembered, never forgotten" Wiebe Funeral Home, Winkler In care of arrangements, 204-325-4201 wiebefuneralhomes.com