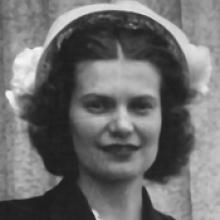 LILLIAN (LIL) WASYLYNA STASHKO (née WIWCHARUK) Lillian Wasylyna Stashko of Fork River, Manitoba passed away on Sunday, May 22, 2016 at the Victoria General Hospital, Winnipeg, Manitoba, at the age of 91 years. Lillian was born on May 5, 1925 in the Ukraina district of the R.M. of Mossey River, Manitoba to Samual and Martha Wiwcharuk. She received her education at Ferley School in Ukraina, Manitoba and was employed with Safeway in Dauphin, MB until her marriage. On February 14, 1953 in Fork River, MB, Lillian was united in marriage to John Edward Stashko. Lillian was a loving and devoted wife and mother, who cared deeply about her family and friends. She had many interests and enjoyed gardening, knitting, embroidery, crafts, and bingo. Lillian was predeceased by her parents, Samual and Martha Wiwcharuk; infant son Douglas; sister Ann Santarsiero; brother John Wiwcharuk; brothers-in-law Charles Santarsiero, Michael Pocatello, Harry Tordon, Glen Frain, Ernie Wright; and sisters-in-law Olga Wiwcharuk, Adeline Frain, Christina Wright, and Betty Tordon. Lillian leaves to mourn her passing: sons, Jeff Stashko and Ken (Barbara) Stashko of Winnipeg, MB; granddaughter Breanna of Winnipeg, MB; sisters Betty Wiwcharuk and Joyce Wiwcharuk of Winnipeg, MB; sister-in-law Ruth Pocatello of Dauphin, MB; as well as many nieces and nephews. Funeral service will be held on Tuesday, May 31, 2016 at Sneath-Strilchuk Funeral Services, with interment to follow in the Dauphin Riverside Cemetery. Friends who so desire may make memorial donations to the Manitoba Heart and Stroke Foundation, 6 Donald St., Winnipeg MB R3L 0K6. Sneath-Strilchuk Funeral Services 502 Main St. S. Dauphin, MB 1-204-638-4110 www.sneathstrilchuk.com