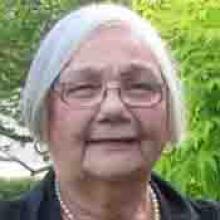 VIRGINIA MARY LAURA MCKERLIE (nee PRUDEN) 1933 - 2016 Virginia Mary Laura McKerlie, age 83, of Miami, MB passed away suddenly on Tuesday, May 31, 2016. Virginia was born in Selkirk, MB on January 8, 1933 to Ambrose and Georgianna (Monkman) Pruden. She was the seventh child in a family of 10 children. Virginia developed a lifelong passion for learning and education during her school years. After graduating from high school in 1952, she moved to Dand, MB and taught school on a teacher's permit. She then enrolled in the Manitoba Provincial Normal School in Winnipeg in 1953 and graduated in June 1954. She taught in Dand for an additional two years and moved to Miami in 1956 where she taught Grades 5 and 6. It was here that she met Lorne McKerlie and on July 11, 1959 they were married and settled on the McKerlie farm. While embracing the next stage in her life as a farmer's wife and homemaker, they were blessed with four children. In April 1973, the family moved to the Dunston Community where they enjoyed many years of farming together until Lorne's passing in 1986. Virginia continued to manage the farm, actively participated in the lives of her children and grandchildren, and volunteered in the church and community. In the fall of 1999 she left the farm and retired to Miami. Although Virginia left teaching in a formal setting, she continued to enlighten many lives emphasizing the importance of family, community and education. Virginia was predeceased by husband, Lorne McKerlie, parents, Ambrose and Georgianna Pruden, sisters, Victoria Ingram and Alice Hygaard, brothers, William and Jean, brothers-in-law, William Ingram, Howard Hygaard, Jack Kelly, Clint McKerlie, and sister-in-law, Jean McKerlie. She is survived by her daughters Margaret Ann (Terry) Baker, Christine McKerlie-Gabrielle, Leslie Bezte, and Lorna (Don) Bonner, sons-in-law Kevin Gabrielle and Darren Bezte, 11 grandchildren Lisa (Tyler) Maes, Terri (Mark) Kroeker, Lauren, Gloria, Adam Gabrielle, Amber, Tristin, Ethan Bezte, Jennifer, Megan and Ryan Bonner, sisters Madeline Pruden, Ruth Kelly, Georgia Pruden, Carole Pruden and Heather Clarke, sisters-in-law Dorothy Pruden, Jackie McKerlie, and brother-in-law Almer McKerlie, as well as many nieces, nephews and friends. Funeral service will be held at 2:00 p.m. on Saturday, June 4, 2016 at the Miami Community Centre with interment at the Miami Cemetery. In lieu of flowers, donations may be made in Virginia's memory to the Miami United Church, or the Heart and Stroke Foundation of Manitoba. Wiebe Funeral Chapel, Morden In care of arrangements, 204-822-4755 wiebefuneralhomes.com