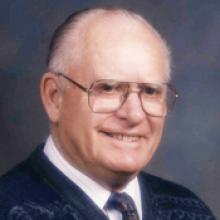 DONALD WILLIAM PRIOR 1920 - 2016 Don Prior, aged 95, of Homestead South, Morden, MB passed away suddenly on Friday, June 3, 2016. Don was born at Teulon Hospital August 5, 1920, to William and Ethel (Trimble) Prior. He lived in the Miami area most of his life. He farmed there for 27 years and then in 1970 became branch manager at the Miami Credit Union, retiring in 1984. After retirement he had many interests including: oil painting, China painting, woodworking, golf and travel. He loved the community of Miami and was involved in many projects including the community centre, medical clinic and golf course, wanting to make Miami a better place to live for future generations. Don was predeceased by his first wife, Mary (Pfeil), sister, Hazel (Bell), and brother, Harold. Don leaves to mourn, his wife, Jean (Millar), his children: sons, Brian (Anne), and Don Jr. (Gwen), daughter, Debbie (friend, Brian), stepchildren, David (Kathy), Raymond (Joyce) and Wendy (Garry). He also leaves to mourn many precious grandchildren, great-grandchildren and great-great-grandchildren, as well as numerous nieces and nephews. Viewing will be from 5:00 p.m. until 8:00 p.m. today at Wiebe Funeral Chapel, 1050 Thornhill St. in Morden. Interment will be held at 11:00 a.m. on Wednesday, June 8, 2016 at Chapel Cemetery in Morden, MB followed by a memorial service at 2:00 p.m. at the Miami Community Centre, Miami, MB and a fellowship luncheon. In lieu of flowers, donations will be gratefully accepted in Don's memory to the Heart and Stroke Foundation or the Miami United Church. Wiebe Funeral Chapel, Morden In care of arrangements, 204-822-4755 wiebefuneralhomes.com