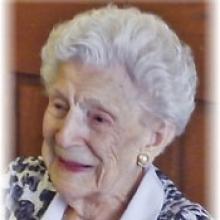 JEAN MARION (LOSS) LAUGHLIN May 4, 1918 - June 4, 2016 With sorrow, we announce the peaceful passing of Jean on June 4, 2016 at the Davidson Memorial Health Centre. Jean was predeceased by her husband Angus, and daughter Wendy Lou Johnson. She is survived by her daughters Cory Laughlin (Scott) and Susan Walker (Tim). She is also survived by her grandchildren; Jennifer Kay (Simon), Andrew Walker, Tyler Walker (Michelle), Tiffany Bara (Jay), Drew Johnson, and Dylan Laughlin; and step-grandsons, Nick and Keith Drieschman; and six great-grandchildren, Jackson, Josh, Ben, Sadie, Charlie, and Maya. She also leaves to mourn her nieces and nephews. Jean was born in Irma, Alberta in 1918. Her parents were Lulu Cantlon and Roy Loss. In her early years she lived in Los Angeles and Seattle before moving back to Cartwright with her mother when she was twelve. Jean was an only child and became close to her cousins, the Boxshall family, who treated her like one of their own. After high school she went to the Art Institute of Winnipeg and became a painter. She studied under LeMoine FitzGerald, who later became a member of the "Group of Seven", Canada's renowned artists. FitzGerald selected Jean as his top student. She went on to paint most of her life, specializing in water colour. She married Angus in 1942 and soon thereafter moved to Baltimore, then to Brooklyn, where her husband was working with the British Airforce. During that time Jean enjoyed her job as a window dresser for Macy's in Manhattan, especially during Christmas. Jean and Angus loved to travel, and two favourite trips were to England and Spain. Their hearts were never far from Rock Lake, however, where they built their dream cabin. Jean was widowed young, and moved to Toronto to be near her grandchildren. Her 20 years in Toronto were filled with family gatherings, and going to fancy restaurants, museums, and theaters with friends. She volunteered at the Toronto Orthopedic Hospital. Jean became a life-long fan of the Toronto Blue Jays and the Toronto Raptors. Thirteen years ago she moved back to her beloved Cartwright and bought her little house on Curwen Street. Her final years were spent gardening, bird watching, shopping, and enjoying being with her family. She had fun times with the Boxshall cousins, and grew even closer to Eileen and Sylvia Wallace. Thursday lunches with "The Matriarchs" often included Vicki Wallace and Jill Gwynne, who met Jean for a weekly lunch until she left us. She loved everyone in Cartwright and looked forward to her daily jaunts to the grocery store, pharmacy, and Corner Pocket. She often said "this is the best place in the world." A Celebration of Life and interment will be announced later in the summer. Donations in her memory can be made to the Cartwright and Area Foundation. Thank you to the wonderful, caring staff at the Rock Lake Hospital, in Crystal City, and to all of you angels who work at the Davidson Memorial Health Centre. Messages of condolence may be made online at www.wheatlandfs.com. Wheatland Funeral Service (204) 825-2848 www.wheatlandfs.com