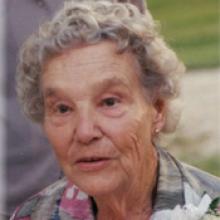 LUCY VAN MOL (CHAMBERLAIN) August 17, 1919 - June 5, 2016 Suddenly but peacefully, Lucy passed away at the Rock Lake Hospital in Crystal City, Manitoba at the age of 96. She was predeceased by her husband John in 1979; as well as five brothers and two sisters. Left to mourn her passing, her sister Mabelle, brother John, sister-in-law Dorothy, son Henri (Doreen), three grandsons; Michael (Becky), Dale, and Glen (Nicole), as well as six great-grandchildren, Emily, Brianne, Logan, Nolan, Nya, and Bella. Born at Home in Rossdale, Manitoba she was educated in the community and took an active part in Girl Guides, Brownies, teaching Sunday school and the Rebecca's. After graduation she went to work at the Hudson's Bay store in Winnipeg where she spent 10 years. In September of 1951 she married John and made her home on the farm at Pilot Mound. Her hobbies were gardening, knitting, and making Vinartertas for the Anglican Bazarre. The family wishes to express their sincere appreciation to the staff of the Rock Lake Personal Care Home for their exceptional care and compassion. A memorial service will be held at St. John's Anglican Church in Pilot Mound, MB on Monday, June 13, 2016 at 2:00 p.m. Lunch will follow at the Parish hall. In lieu of flowers donations in Lucy's memory may be made to Rock Lake Personal Care Home; 424 Broadway Ave. Pilot Mound, MB R0G 1P0. Messages of condolence may be made online at www.wheatlandfs.com. Wheatland Funeral Service 204-825-2848 www.wheatlandfs.com