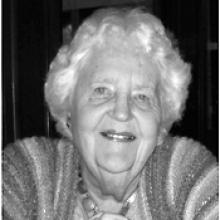 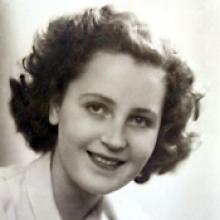 JOSEPHINE MARY EARN Josephine Mary Earn passed away peacefully in Hamilton, Ontario, on May 7, 2016 at the age of 87, after an illness of a few months. She will be sadly missed by her children, Dinah and Jay Goldenberg of Fargo, ND, David Earn and Sigal Balshine of Hamilton ON; sister and brother-in-law, Dinah and David Andrew of Audlem, Cheshire, UK; grandchildren, Samuel and Matthew Goldenberg, Arielle and Maya Earn; and many other relatives and friends. She was predeceased by her parents Dora and William Throne, and by her husband Dr. Abe Earn. Josephine was born in 1929 in Leicestershire, England. She studied English Literature at University College, London, before training to become a medical social worker. While working at Leicester General Hospital she met Abe, during his specialty medical training in England. This relationship and subsequent marriage brought her to Winnipeg, where Abe had grown up. From 1959 to 1964, Josephine taught at the school of social work at the University of Manitoba. She then took on major roles in Planned Parenthood, eventually becoming president of Planned Parenthood Canada in 1976. At the same time, she wrote a book about Canada, intended for children in other countries ("Looking at Canada", published in 1976). Josephine's experience of bridging and embracing different cultures and religions exemplified and helped instill in her children and grandchildren a loving curiosity and a balanced and tolerant view of the world. She took great delight in her children's educations, marriages, travelling together, and doting on her grandchildren. Though heartbreakingly, for the last 21 years, she was without the love of her life. She was a kind, thoughtful, gracious, generous and modest person. She also had exceptional abilities in dissecting arguments and elegantly expressing her thoughts. After being diagnosed with cancer, Josephine chose to move to Hamilton in March 2016 to be close to family. Her funeral was held in Winnipeg at the Etz Chayim Synagogue on May 11, 2016. Pallbearers were Jay Goldenberg, Samuel Goldenberg, Matthew Goldenberg, Sheldon Earn, Darren Earn, and Seth Earn. Josephine was a much-loved mother, mother-in-law, grandmother, sister and friend. She was also an inspiring and pioneering voice for women's reproductive choices. She was admired and respected in the deepest possible way by all who were privileged to meet her. She will be deeply missed. Donations to the Josephine M. Earn Women's Endowment Fund at the Jewish Foundation of Manitoba, or to any charity of choice, would be welcome.