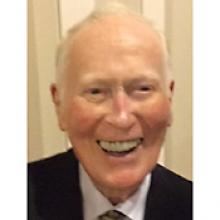 HERBERT BRIAN HOWLAND STEWART It is with deep sadness that we announce the peaceful passing of Herbert Brian Howland Stewart, after a brief illness, on June 16, 2016. Herbert was born on May 22, 1928 in Winnipeg and was the third of four sons born to Henry Greenwood Stewart (Harry), and Elizabeth (Chub) Howland Stewart (nee Reeves). He was predeceased by his parents, brothers Dennis, Lawrence and Henry (Hank), and Hank's wife Jocelyn. He is survived by his sisters-in-law Girnith and Gloria, nine nieces and nephews, their spouses, children and grandchildren, plus many who considered him to be their uncle. He remained happily unmarried. Herbert was someone who knew how to live. What an attitude! People who met him said he was "an inspiration" and that he dressed as if he represented "GQ for octogenarians". Herbert's life was defined by lovability, a positive attitude, charm, connectedness, and COMMUNICATION. He corresponded with his grade 12 Latin teacher for 64 years before moving back to Winnipeg and meeting her in a Continuing Education class. Herbert continued to use a fountain pen, and was a prolific writer. The ideas that he shared were inspiring and his letters were often treated as keepsakes. In the late 1940s Herbert studied architecture at the University of Manitoba and then worked for Green Blankstein and Russell, (now Stantech). He maintained close friendships with these colleagues all his life. In the late 1950s, Herbert left Winnipeg to attend music schools in London, England, studying voice, with a view to a career in opera. Ultimately he decided that architecture would be a more pragmatic career path to follow and decided to settle in Toronto. While keeping his feet on the ground with architecture he continued to sing in operas, musicals, and choirs, and had a lifelong love of the arts. Herbert made light of his accomplishments, displaying things like his Certificate in "Beginner's Tap Dancing" which he earned when he was in his 60s. Herbert was a member of Subud, an international spiritual association, for over 50 years. He was an early member of Subud Toronto as well as serving as Chairman of the International Subud Committee from 1975 to 1979. He traveled extensively and developed friendships with Subud members all over the world. In the early 1980s Herbert's friend, Ken Ang, fellow graduate of the University of Manitoba Faculty of Architecture, invited Herbert to join his architectural firm in Singapore. Herbert accepted and in addition to his architectural work, he was quickly drawn into musical circles and performed at the Raffles Hotel on numerous occasions. He eventually returned to live in Toronto and finally moved to Winnipeg in 2010 where he renewed old acquaintances and promptly joined three choirs. Many thanks to the wonderful staff of St. Boniface Palliative Care for their care and compassion. Also thank you to the many friends, who called, wrote, visited and honoured him in their thoughts and prayers. Cremation has taken place. Funeral services will be held on Saturday, June 25 at 11:00 a.m. at Holy Trinity Anglican Church, 256 Smith St. (please use the entrance off Donald Street), followed by a reception next door at "The Met", 281 Donald St. A private interment will take place at a later time. In lieu of flowers, please consider a donation in Herbert's memory to the University of Winnipeg, Stewart Family Scholarship Fund (PACE) c/o the UW Foundation, 901 - 491 Portage Ave., Winnipeg, MB R3B 2E4, or the charity of your choice. THOMSON "IN THE PARK" 204-925-1120 Condolences may be sent to www.thomsoninthepark.com
Publish Date: Jun 22, 2016