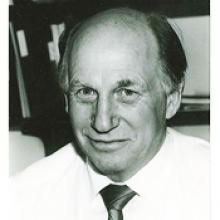 DR. LAURIE EDWARD EVANS It is with deep sadness that the family announces the passing of their father, Laurie Evans in the early hours on Father's Day, Sunday, June 19, 2016 at the age of 82. Laurie was predeceased by his parents and wife, Mary Ellen. He will be lovingly remembered by his daughters Normajean Evans (Peter Bohonos), Nancy Shynkaruk (Corrie), Laura Jansen (Rick, Ian and Tom), and their mother, Laurie's first wife and good friend Frances Talbot. Also mourning his passing are brother Bill Evans and family, sister Janice Chapel and family, and stepsons John Storzuk and Joe Storzuk. Laurie was born on October 14, 1933 in Unity, Sask. He grew up on the family homestead and began his education in a one room schoolhouse. He went on to obtain his Bachelor's Degree at the University of Saskatchewan and his PHD in Cytogenetics and Plant Breeding at the University of Manitoba where he became the Head of the Dept. of Plant Science in the Faculty of Agriculture. Laurie's career at the University took him to many different places including Africa and Australia where he worked as a Technical Advisor and Visiting Professor while expanding his research in Genetics and Plant Science. Laurie enjoyed his public service endeavors ranging from being elected as the President of the Fort Richmond Community Club in his earlier years to his elected position of MLA for Fort Garry with the Liberal Party. He spent the majority of his retirement years living in the Paradise Village Retirement Community where he continued his public service for several terms as the Councillor for the RM of Ste. Anne. In January 2015, after the passing of Mary Ellen, dad settled in at the Seine River Retirement Residence in Winnipeg to be closer to his family. Laurie was a man of many interests but was most happy when surrounded by family. He loved a good joke and maintained his dry sense of humor even in difficult times. He was a lover of animals and an avid sports fan, forever following his beloved Toronto Maple Leafs, Green Bay Packers, Los Angeles Dodgers and Saskatchewan Roughriders. We wish to thank the staff of the Dialysis Unit at the St. Boniface Hospital for their many years of compassionate care and the nurses of 7A south who kept him comfortable during his final hours. In lieu of flowers a donation may be made in Laurie's memory to: The Kidney Foundation of Canada, Manitoba Branch, 1-452 Dovercourt Drive, Winnipeg, MB, R3Y 1G4. A celebration of Laurie's life will be held at 10:00 a.m. on Friday, June 24, 2016 at Glen Lawn Funeral Home, 455 Lagimodiere Blvd. Family and friends may sign a Book of Condolence at www.glenlawn.ca Glen Lawn Funeral Home 204-982-7550
Publish Date: Jun 22, 2016