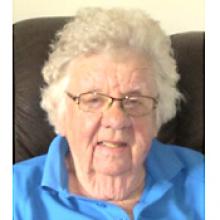 FLORENCE DOREEN (MICK) FENN Suddenly, yet peacefully, with her daughter and son-in-law, Cathy and Ed Shaw at her bedside, Florence Doreen "Mick" Fenn, passed away on Monday, June 20, 2016 at the Brandon Regional Health Centre. Born February 20, 1928 in Winnipeg to Helen and Bill MacMillan, Mick grew up in Hamiota, Manitoba, as well as a few other locations in rural Manitoba and Saskatchewan. She moved to Winnipeg, where she met and married George Fenn in 1950. Together they raised three daughters, Anne, Linda and Cathy, in St Vital. After retirement, George and Mick moved to Manitou, Manitoba, where they enjoyed the community and especially the golfing. Mick had been an avid golfer, golfing well into her 80's, a curler and a Blue Jays fan. Remaining to cherish Mick's memory are her daughters, Anne Bubbs, Linda McGuire and Cathy Shaw; her sons-in-law, Terry McGuire and Ed Shaw. She is also survived by her six grandchildren: Laura Jacques and husband Nathan, of Perth, Australia, Ellen Bubbs, of Winnipeg, Manitoba, Erin and Kelsey McGuire, of Calgary, Alberta, Ryan and Cale Shaw, of Brandon, Manitoba; her great-grandson Rory Jacques, of Perth, Australia; and her brother Don MacMillan, of Brandon, Manitoba. She was predeceased by her husband George, in 2009 and her son-in-law Terry Bubbs, in 2008. At Mick's request, no service will be held. Donations in memory of Mick may be made to a charity of choice. Expressions of sympathy may be made at www.memorieschapel.com. Arrangements with Memories Chapel, Brandon 1-855-727-0330.