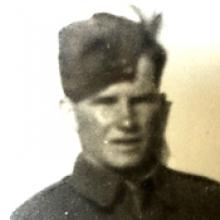 BRYCE BADGLEY 1924 - 2016 On Friday, June 17, 2016, at the Red River Lodge in Morris, Manitoba, Bryce Conrad Badgley, beloved husband of the late Marget Badgley, father, grandfather and great-grandfather, passed away peacefully. Bryce leaves to mourn his children, Robert (Susan) and family, Elaine (Doug) and family, Rodney and family, Bruce (Shanna) and family; brothers, Mike, Allan (Marion); brother-in-law George Fast; sister-in-law Rose Pott and many nieces and nephews. Bryce was born October 26, 1924 to John and Susan Badgley in Woodmore, Manitoba. Bryce enlisted with the Calgary Highlanders at age 19, taking his basic training in Shilo, Manitoba and was sent overseas in 1944, serving in England, Holland and Germany. After serving his country during the Second World War, Bryce returned home and took over the family farm, there he met and married his bride, Marget Pott, in 1953, to whom he was married for 49 years. Upon retiring from farming, Bryce often helped neighbours and friends with spring seeding and fall harvesting. He also was an avid gardener and became active with the Franklin Craft Club, taking up woodworking, where he made many items that his family and friends enjoyed. Bryce was a Life Member of the Roseau Valley Branch #160 of The Royal Canadian Legion. A memorial service will be held on Friday, June 24, 2016 at 2:00 p.m. at Greenridge United Church, Greenridge, Manitoba. In lieu of flowers, donations can be made to the Greenridge Cemetery Fund or the Manitoba Heart and Stroke Foundation. Vita Funeral Home In Care of Arrangements 256 Railway Avenue Vita, Manitoba Phone 204 425 3114