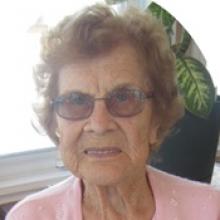 MARY TKACHUK (nee SAPROWICH) March 15, 1924 - June 27, 2016 It is with deep sadness that we announce the passing of Mary (Maria) Tkachuk, age 92, on Monday, June 27, 2016 at the Vita and District Health Centre. Mary is survived by her two sons, Bob (Diane) and Lorne, her daughter-in-law Eleanor, her grandchildren, Dustin, Sonny (Lois), Victoria (Jeremy), Christine (Isaac) and Cassandra (Don) and her great-grandchildren, Sophia, Richard and Isabella who knew her as "Super Grandma". She is also survived by her siblings, George, Lee, John (Delores), Frank (Mariette), Alec (Betty) and Sonia (Armand), her sisters-in-law, Mary, Olga and Sophie (Bill) and her many nieces and nephews. She is predeceased by her husband John, son Rick, father Stefan, mother Katherine, brother Johnny, sister Florence, brother Nick, sister Anne, brother Bill and sisters-in-law, Lena, Gloria, Verna and Anne. Mary was born on March 15, 1924, and grew up on a small farm south of Gardenton, MB. She was 16 years old when she first left home to help with farm work and to harvest sugar beets in Dominion City. In the 1950s, she worked in Winnipeg at the Bell Hotel on Main Street as a housekeeper, at Macleods Hardware Store and at Simmons, hand sewing mattresses. As often as she could, she would make the day-long train ride from Winnipeg to Gardenton to bring crayons and toys back for her younger siblings and to spend time with her mother. When she was 26 she met her husband John and soon after had their three sons. In 1959, they moved back to the family farm and lived there for many years working very hard in the fields and in her gardens. She was fortunate to live on the family farm with Rick, Eleanor and granddaughters for many years until Christine and Isaac took over the farm more recently. Her greatest loves were her geraniums, dancing, her little cat Jet, and most of all, her family. Nothing meant more to her than the visits and phone calls she received from all of the people she loved. In her final days, she still had lots to do and accomplish, and her fierce strength and personality kept her a fighter right until the end. The funeral service will be held on Thursday, June 30, 2016 at 11:00 a.m. at the Vita Funeral Home, 256 Railway Avenue, Vita, MB. Interment will follow the funeral service at the Gardenton Ukrainian Orthodox Cemetery. Our family would like to send our sincerest thanks and gratitude to Dr. Ulanovych and all of the staff at the Vita and District Health Centre for their support, assistance and patience with our "feisty" Grandma. Arrangements by: Vita Funeral Home 204 - 425 - 3114