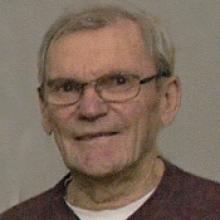 DOUGLAS BARRIE JAMES SMART 1935 - 2016 Douglas Barrie James Smart passed away peacefully at the age of 80 on June 28, 2016 after a courageous fight against cancer. He will be forever missed and loved by his three children, Cheryl (Alvaro), Richard and Brent (Renee); his grandchildren, James, Cristovao and Tanci; as well as his beloved friend, Lynn. Also left to mourn his passing are three siblings; his sisters, Betty and Audrey (Stan) and his brother, Don. He was predeceased by his wife, Anne Marie (nee Fehr), his brother, Alan and his sisters, Muriel, Jean, Vera and Dorothy. Barrie was born on July 11, 1935 in Portage la Prairie, MB, the youngest of nine children. His family moved many times through his childhood living in several Manitoba communities including Raeburn, Rathwell, Komarno and Dominion City. In 1954, he joined the Canadian Air force serving for three years. Barrie had a long career with the Manitoba Water Resources Branch that took him all over the province making friends wherever he went. In 1962, his work moved him to the Winkler area where he became smitten with a sassy young waitress at the Green Lantern Café by the name of Anne Marie Fehr, a few short months later she became his wife of 48 years until her passing in 2011. Barrie and Anne enjoyed a full life together sharing a passion for curling, camping, fishing, road trips in their motor home and above all family. He was well known for his love of sport and his mastery of skate sharpening. His quick wit and sense of humour stayed with him until the very end and his ability to get a laugh out of whomever he was with will be missed dearly. Viewing will be from 1:00 p.m. to 9:00 p.m. on Monday at Wiebe Funeral Chapel 1050 Thornhill St. in Morden only. A celebration of life will be held Tuesday, July 5, 2016 at 1:00 p.m. at St. Paul's United Church, 353 Thornhill St. Morden, MB with interment to follow at Chapel Cemetery. In lieu of flowers, donations may be made in Barrie's memory to either Boundary Trails Health Centre Palliative (CancerCare) or to CancerCare Manitoba, available at the church. Wiebe Funeral Chapel, Morden In care of arrangements, 204-822-4755 wiebefuneralhomes.com