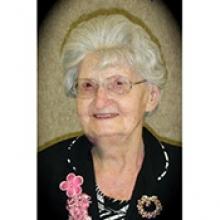 MARGARET LOEWEN (nee PENNER) 1909 - 2016 On Wednesday, June 29, 2016 at Victoria General Hospital, Margaret Loewen aged 106 years of Winnipeg, MB formerly of Winkler, Morden and Carman went to her eternal rest. She leaves to mourn her passing two daughters, Margret Thiessen, and Alvina and Bernie Thiessen, one son, Ken and Eva Loewen as well as nine grandchildren, 12 great-grandchildren and two great-great-grandchildren. She was predeceased by her husband, Henry B. Loewen in 1990, a daughter, Mirian in infancy in 1935, and a son-in-law, Frank in 2005. Viewing was held between 11:00 a.m. and 12:00 noon, Monday, July 4, 2016 at Wiebe Funeral Home, 121 8th St. in Winkler. Interment was at 12:30 p.m. at Winkler Cemetery followed by a memorial service at 2:00 p.m. at the Bergthaler Mennonite Church 252 6th St. in Winkler. In lieu of flowers, donations may be made in Margaret's memory to the Mennonite Central Committee (MCC), available at the church. Wiebe Funeral Home, Winkler In care of arrangements, 204-325-4201 wiebefuneralhomes.com