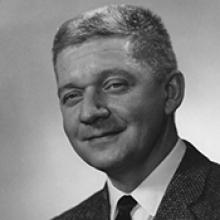 DR. ROBERT JOSEPH SOPER F.A.I.C, F.C.S.S.S August 25, 1927 - July 21, 2016 Bob Soper grew up in Weston, ON the son of Joseph and Myrtle Soper. He was predeceased by his siblings, Mary, Lorna, Jean (all in infancy), Norma, Jack and Keith. He is lovingly remembered by his wife Margaret, daughter Evelyn and son-in-law Mitch Funk, son David, granddaughter Katie, and sister-in-law Patricia Wood. Following the tragic death of his father when he was eleven, Bob did not allow strained circumstances to dissuade him from attending the University of Saskatchewan and McGill University and becoming a university professor. At the Macdonald College campus of McGill University, Bob met Margaret Patterson who became his devoted wife for 59 years. They moved to Winnipeg in 1958 when Bob accepted a position with the University of Manitoba. In 1972 the family moved to Vienna, Austria for three years when Bob joined the Joint Division of the Food and Agriculture Organization (FAO) and the International Atomic Energy Agency (IAEA). While with the UN, Bob supervised research programmes in developing countries. Bob's research career spanned topics in soil chemistry, soil fertility and crop production. He helped develop and use radioactive phosphorus in crop nutrition studies and became a leader in the use of stable isotope-labelled nitrogen to measure nitrogen dynamics in soil and biological nitrogen fixation in legume crops. He developed a soil test for available nitrogen that has been used in Manitoba and most other regions of the North American Great Plains. He also supervised studies in potassium, sulphur and zinc nutrition that are still used in fertilizer recommendations. Bob loved to teach, supervise research and engage with farmers in all parts of the world. He visited Sri Lanka many times and called it his second home. His professional awards included being named a Fellow of the Agriculture Institute of Canada and the Canadian Society of Soil Science, a Distinguished Graduate of the University of Saskatchewan Faculty of Agriculture and receipt of the Queen's Silver Jubilee Medal. Upon retirement from the University of Manitoba, the honour of Professor Emeritus was conferred upon him. Bob and Margaret developed an enviable travel schedule but it was the time spent in Barbados with family and friends that he enjoyed most. His family is most grateful for the excellent and compassionate care Bob received from Dr. Tim Ross, the WRHA Home Care Aides, the staff on Unit 2 of Victoria General Hospital and the Simkin Centre. Family and friends will gather to honour Bob's memory at a later date. Donations to the Victoria General Hospital in recognition of their exemplary care would be welcome.