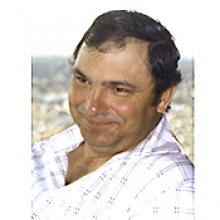 ROBERT DARREL PETKAU April 4, 1954 - August 9, 2016 On a calm prairie evening, our dear brother, fun-loving uncle, devoted friend and faithful servant of the Lord, Darrel Petkau, died after a two month stay at Boundary Trails Health Centre near Morden. Darrel is survived and lovingly remembered by his two brothers, one sister and their families: Brian Petkau and his wife, Evelyn Rempel Petkau and children, Johanna and new husband, Jimmy Bang, Tamara and husband, Joel Kulik, Justin and wife, Sylwia Sieminska; Brent Petkau and his wife, Suzanne Dueck and children, Hannah and Xavi; and Arlene Petkau Petrie and sons, Graham and Duncan. Darrel had a special relationship with his nephews and nieces. They cherished each other. Darrel was predeceased by his mom, Betty in 2010, his dad, David in 2014, and his brother-in-law, Bill Petrie in 2015. Darrel was a true original. From an early age, he loved working with his hands. Darrel could make a spud bazooka, coal stove, horse trailer, mechanical bull and tiny hand-milled model steam engines - just for fun. He was interested in everything. That love of creating continued throughout Darrel's entire life on the farm where he grew up, 10 miles west of Morden. "Petkau's Leather" became a go-to place for anyone who needed custom chaps, bridles, harnesses, holsters and quivers. His original hand-tooled saddles, often with 2500 hours of work in them, were his prized creations for his customers. One of Darrel's special gifts was his love of people and his ability to relate to each person he met. When anyone came onto his yard, time didn't matter. A short stop in his tack shop could quickly turn into a five-hour visit, complete with a spin in muddy ditches with his customized VW dune buggy. Darrel's courage, compassion and generosity were all shaped by his unwavering Christian faith and love of Scripture. As head wrangler, he shared his love of God and horses with countless campers at Camp Hebron in Pennsylvania and at church camps in Manitoba. Serving with Mennonite Disaster Service in West Virginia for six months meant he could meet people from all backgrounds and bring some of his joyful energy to them as he shared their hardships. We will all miss his exuberant laughter, his funny sayings, his crazy antics with his goats, and the magic he made with his trick horse, AJ, named after Alan Jackson, one of Darrel's favourite country singers. Funeral service will be held at 2:30 p.m. on Sunday, August 14, 2016 at Morden Mennonite Church 363 Gilmour St. with interment to follow at Southside Cemetery. Darrel's family would like to thank all staff at Boundary Trails for their care and for the love they showed Darrel. It meant the world to him and to us. If friends so desire, donations will be gratefully accepted to the Canadian Foodgrains Bank, an organization close to Darrel's heart. Wiebe Funeral Chapel, Morden in care of arrangements, 204-822-4755 wiebefuneralhomes.com