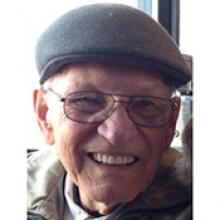 ALBERT OLIVER RIDLEY "Love me but let me go" "Elska mig en lata mig fara" Al Ridley, beloved husband of Rill Ridley passed away unexpectedly on August 14, 2016 at the age of 84. Al was born at home on January 15, 1932 in West St. Paul, MB, of English and Icelandic heritage. He attended West St. Paul School and St. John's Tech. After graduating from high school Al joined the Canadian Air Force Reserves and earned his Bachelor of Science degree in Agriculture from the University of Manitoba. It was during a posting in Calgary that he met the woman who would be by his side for the next 62 years. They were married in Winnipeg in 1953 and began their family. In 1958, Al achieved his Masters degree in Agriculture from the U of M. Al was a loyal long-term employee at the U of M during his career: initially as a Plot Foreman and Lecturer, and eventually achieving full tenure as Professor in Soil Sciences until his retirement in 1995. His research on the application of nitrogen fertilizer in cereal production has been of great importance to agricultural practices in Manitoba. Al was an original. He was a modest man of integrity. Hardworking and committed, he never took the easy way. He was a devoted husband and father with an unquenchable thirst for knowledge. Al was an avid curler and member of both the St. Vital and Heather Curling Clubs. When he wasn't curling he was watching curling or attending bonspiels. He loved reading, golfing, fishing, and never met a sport he didn't like. He had a passion for airplanes, history, documentaries, apple pie, peppermint ice cream, and poverty beans at Christmas. His quick wit and dry sense of humour never ceased. Al loved to travel and spent every summer taking his family camping across North America. We all have many memories of the old blue Chrysler, canvas tent, air mattresses, and later, when we could afford it, the pop up camper. But North America was too small for him. In 1974 he accepted a position with CIDA to research winter wheat in Kenya, East Africa until late 1975. What an adventure that was for us all! True to his adventurous nature he explored Kenya with his family, camping in game reserves and watching wildlife; sometimes too close for comfort! But we all knew he would never put us at risk. He took some amazing wildlife photos that we all loved to see during family slide shows. In 1980 the opportunity to return to Kenya arose and he jumped at it. Mom and Dad spent another two years in Kenya, joined by Cheryl and Karyn at different times. In 1988, he and Mom spent six months in Queensland, Australia where he studied wheat production issues. But that wasn't all. Al LOVED travel. During his life he visited South Africa, Australia, New Zealand, England, Italy, Greece and Egypt to name a few. What started as a subscription to National Geographic had become a lifelong passion. But what Al loved most was his family. He was happiest when surrounded by us all. He was the glue that held us together. He spent many hours cheering on his grandchildren at their sports events. Family get togethers were important to him. These were times when he could sit in his chair and watch all the commotion. He was an active and dedicated granddad to his grandchildren and was thrilled to become a great-granddad in 2015. He was proud of us all. Al is lovingly remembered by wife Rill; daughters, Marlene Reeder (Richard), Linda Ridley (Terry), Cheryl Ridley and Karyn Crone (Jim); grandchildren, Nicholas, Jessica, Oliver (Lindsay), Avery, Liam and Sam; great-granddaughter Millie; sister Rhoda; brother Ken; and numerous extended family members. He was predeceased by his parents, Rhoda and Buck; sister Joyce; and brother-in-law Charlie Gessner. The family would like to thank the staff at the St. Boniface Hospital Emergency Department for their compassion and care. As per Al's wishes no formal service will be held. In lieu of flowers, donations may be made to the Heart and Stroke Foundation of Manitoba or to a charity of your choice. Dad, you will be greatly missed. The influence you had on your family was profound. We will carry you in our hearts forever. We love you. From all your "dolls, girls, big guys, princesses and sports." "In the end it's not the years in your life, it's the life in your years." (Abraham Lincoln) NEIL BARDAL FUNERAL CENTRE 204-949-2200 neilbardalinc.com
Publish Date: Aug 20, 2016

ALBERT OLIVER RIDLEY On Sunday, August 14, 2016, at the Riverview Health Centre, Al Ridley passed away at the age of 84 years. Cremation has taken place and no service will be held. A longer obituary notice in Saturday's paper. NEIL BARDAL FUNERAL CENTRE 204-949-2200 neilbardalinc.com