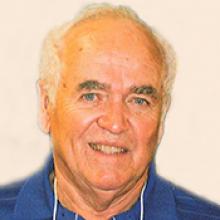 ROBERT (GARY) PLATFORD, PhD July 24, 1945 - August 16, 2016 It is with great sadness that the family announces the passing away of our beloved Gary. He was well loved by many, especially his wife Norma of 49 years. His three children, Kevin, Heather (John Mark Davies) and Nicole (Erik Lindquist). He leaves behind his adored grandchildren, Andrew, Katerina, David, Janine and Megan. He was predeceased by sisters, Joan and Irene; mother Annie and father Fred. He is survived by his two brothers Dale (Laura), Doug (Judith) and many nieces and nephews. He will be missed deeply by the Pradhan family and the fishing guys. Gary was the plant pathologist, Dept. of Agriculture, retired in 2000. After retirement he established a business called P & D Consulting. He established the Provincial Plant Pathology Lab at the University of Manitoba Campus. Gary loved his plants, even the weeds. The world was fascinating to Gary. He delighted in tasting foods from all around the world. He made a "mean" margarita, loved mountain climbing in Arizona, canoeing, camping, fishing, travelling and in his spare time he volunteered. He was a long time president of the "Prairie Garden". He was participating in the creating of a Norn Dictionary which is an extinct language. In his last months he has been practicing Tagalog and Nepali. He loved to read the epic poem "Beowulf," in the original Anglo-Saxon Old English. There was always a pile of books under his chair. He did beautiful sketches, and enjoyed photography. Those who knew Gary will know how funny he could be. For all his interests, abilities, degrees of education, Gary was a very humble man. He greatly appreciated the endless support of family, especially Jonathon for his many visits. Thanks to Doug for his visits and the chocolate. The support of Dale, Laura, Gary, Aline, Phyllis, Ray, Keith, Judy, Carol and the Pradhans kept our family strong. He will be greatly missed. A celebration of Gary's life will be held at 7:00 p.m. on Tuesday, August 23, 2016 at Glen Lawn Funeral Home, 455 Lagimodiere Blvd. Thanks to all the caregivers at St. Boniface, Grace Hospice and Home Care. Donations may be made to either St. Boniface or Grace Hospice or a charity of your choice. Family and friends may sign a Book of Condolence at www.glenlawn.ca Glen Lawn Funeral Home 204-982-7550