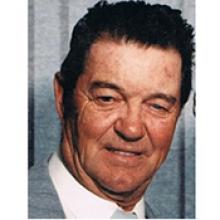 STANLEY (STAN) ALBERT STEWART April 1, 1928 - August 25, 2016 It is with heavy hearts that we announce the peaceful passing of our beloved husband, father, grandfather, great-grandfather and brother, Stanley Albert Stewart on Thursday, August 25, 2016, at the age of 88 years. To cherish his memories, Stan leaves his beloved wife Elsie of 58 years of marriage; children, Cheryl (Bruce), Bonnie (Guy), Derrick (Marilyn) and Corrine (Trevor); grandchildren, Lindsey (Justin), Ryan, Taylor, Bobbi, Brittany, Brett, and Amy; his precious great-grandson Quinn; siblings, Edna, Raymond, Allan (Liz), Harvey, and Vivian; mother-in-law Katie Sytnick; and many nieces and nephews. Stan was predeceased by his parents, Elwood and Bertha; siblings, Marland and Norma; brother-in-law Lyle; and sisters-in-law, Ruth, Jean and Pat. Stan was born and raised in Gladstone (Happy rock), Manitoba. In 1957 he ventured into Lac du Bonnet where he met the love of his life Elsie. Stan was a man of many words, his love for family, life, people and his great passion for animals especially his little girls Snoopy, Tiffy and Abby spoke volumes for his gentle heart. He played hard, worked hard and took great pride in all that he accomplished. Stan and Elsie's door and hearts were always open to everyone. In compliance with Stan's wishes, no formal Funeral Service will he held, however for those who wish to pay their respects to the family, a come and go Celebration of Stan's Life will be held on Saturday, September 3, 2016 between 2:00 and 5:00 p.m. at the residence of Stan and Elsie, 333 Park Avenue, Lac du Bonnet, Manitoba. Our family would like to express sincere thanks to Dr. Bruneau, the staff at Pinawa Hospital and the ambulance attendants for their special care of Stan. Wojcik's Funeral Chapels & Crematorium (Serving Beausejour), 204.268.2263 or 1.866.424.6271 www.wojciksfuneralchapel.com "We forget that time is precious, we tend to let things go, and the most important things go unexpressed, this comes to bring the thanks we owe and to say you're not just special you're the best."