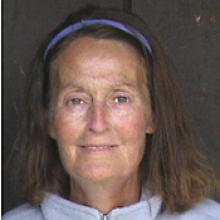 JANET ROSE PAYNE (nee EVANS) July 12, 1953 - September 5, 2016 After a long and courageous battle with illness, Janet Payne has passed away peacefully at the Brandon Regional Health Centre. Janet was 63 years of age. Janet is survived by her mother Doreen Deleu, husband Jovan Milinkovic, sons Tim (Sherry), Kirk and Collin (Carla), grandchildren Jacob, Emma, Mason, Devin, Braden, Marina and Kailon, brothers Ron (Diane), Gary (Viviane), Mark and Bruce (Linda), sisters Donna (Gaston), Laura (George), and numerous extended family members and friends. Janet was predeceased by her daughter, Mona. Janet was born in Swan Lake, Manitoba, on July 12, 1953. Janet spent her entire life in Manitoba, living in Swan Lake, Thompson, Winnipeg, Pilot Mound, and Killarney. Janet's working life included farming, hairstyling, the restaurant industry, as well as property management. Family was very important to Janet, and she loved spending time with her children and grandchildren. Janet loved to cook and work in the garden, and she adored her pets. Janet also enjoyed fishing as well as playing piano. The family wishes to thank the staff members who work at the Intensive Care Unit in Brandon Regional Health Centre, as well as the staff at both Bayside Personal Care Home in Killarney and Rock Lake Personal Care Home in Pilot Mound. A Memorial service will be held for the family on Saturday, September 10, 2016 at the Wheatland Funeral Home, Hwy. 18 and Park Street, Killarney, Manitoba. In lieu of flowers, donations may be made in Janet's name to the MitoCanada Foundation, https://www.canadahelps.org/en/charities/mitocanada-foundation/ Condolence's online at www.wheatlandfs.com