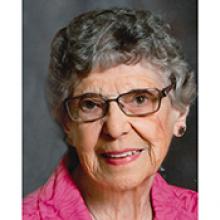 ADELINE PARKER It is with deep sadness we announce the passing of Adeline (Adele or GiGi, as known by her great-grandchildren) Parker on September 5, 2016 at the age of 96 years. Born in Dominion City on August 24, 1920 to Harry and Francis Brooks, she was the eldest of five children. Predeceased by her son Alan, brothers Wally and Harold Brooks, sister Jean McPhail, and son-in-law Kim Sorensen. Survived by her loving husband, David, of 71 years, daughter Barbara Sorensen of Kamloops, BC, granddaughters Tracey (Wayde, Alexa, Shayne and Aryn Simpson) of Belleville, ON, Shauna (Lance, Erika and Evan Kissack) of Kamloops, BC, Jodi (Cole, Parker, Jack, Jessica and Connor Sorensen) of Victoria, BC, and sister Maxine Francis of Hamilton, ON. Adele met her sweetheart, David, in the Air Force in 1943 and married in Victoria, BC on August 6, 1945. She started her working career at Air Canada on the military base in the instrument department, then Eatons department store at Polo Park as a saleswoman, and finally as a teacher assistant at John. M. King elementary school. She took time off work to raise their children, daughter Barbara (1947) and son, Alan (1953) on Dominion Street where she lived for 57 years. Adele belonged to St. Andrews Church, Daughter of the Nile, the Thistle Curling Club and the Empress Lanes bowling club for many years, making several friends along the way. She was a huge sports enthusiast since she was young, playing her favourite sport, baseball, into her teenage years. Her pastime was spent watching her sports teams on TV (Blue Bombers, Jets, Wheat Kings and Blue Jays) while David napped in the chair beside her. They never left each other's side. Adeline you will always be remembered and remain in our hearts forever. Say Hi to the family for us. No funeral service at the request of the family. No flower arrangements please, make a donation to Crohn's and Colitis Canada in memory of Adele. For those who wish to sign the online Guest Book please visit our website. Chapel Lawn www.chapellawn.ca 204-885-9715