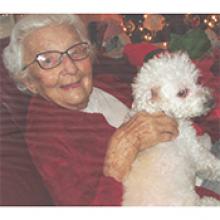 BARBARA HALIBURTON (HAMON) ALDOUS December 12, 1921 - August 20, 2016 Barbara Aldous, aged 94 of Winnipeg died peacefully, surrounded by her family on August 20, 2016. Born in Newfoundland, she spent most of her early life in Winnipeg, where she met and later married her late husband, Brig. General George Galt Aldous, MC, CD. Married for 66 years, they lived in Montreal and Ottawa where they raised their children; Montague Aldous of Winnipeg and Marjorie Orshak of Marshfield, MA. Barbara's love of children radiated during her 28 year career as Assistance Head Mistress and Teacher of IB Art History at Elmwood School, Ottawa. After retiring, she and George returned to Winnipeg, where she volunteered to teach and work with Elementary School children, sharing her passion of Art History. She was an active member of both The Winnipeg Art Gallery Study Group and St. George's Crescentwood Anglican Church, where she served on a variety of church committees. Her deepest love was the cottage at Lake of the Woods. "Daga", as she was fondly known and George spent many summers sharing stories with family and friends, sitting on the veranda, looking out across the lake. She is also survived by her daughter-in-law Verginia Aldous of Winnipeg; son-in-law John Orshak of Marshfield, MA.; her grandchildren, Kathryn McCullins (Mark), Mobile, AL., Robert Orshak, Los Angeles, CA., Christina Proppe (David) of Hingham, MA., Amanda Aldous, Cold Lake AB.; great-grandchildren, Kai McCullins, Kali McCullins and Lily Proppe; as well as several nieces and nephews. She was predeceased by her sister Isabelle Proctor MacKay; granddaughter Kimberley Orshak; and nephew Donald Proctor, Jr. Memorial Service will be celebrated at St. George's Crescentwood Anglican Church, Saturday, September 24, 2016 at 1:30 p.m. Interment Ceremony will be held Monday, September 26, 2016 at 10:30 a.m., St. John's Cathedral Cemetery, 135 Anderson Avenue, Winnipeg. In lieu of flowers, donations in her memory may be made to Operation Smile Canada, Rossbrook House, Winnipeg, Cancer Care or an organization of your choosing, would please Barbara immensely.. THOMSON "IN THE PARK" 204-925-1120 Condolences may be sent to www.thomsoninthepark.com