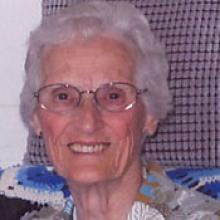 MILDRED RUTH CHAYTOR (nee MOLONEY) 1920 - 2016 On Thursday, September 8, 2016, at Tabor Home, in Morden, MB, Mildred Chaytor, aged 95 years, went to her eternal rest. Mom was born on the family farm in the Kaleida district on September 14, 1920, to Garnet and Pearl Lily Moloney. She was one of six siblings, one of which died in infancy. She attended Overdale School near Kaleida. She married Ferris John Hunt on October 22, 1942, and they lived on a farm a few miles from the home place. They were blessed with two daughters, Hazel and Lillias. Mom was a homemaker and enjoyed cooking, baking and looking after the family. The family moved to Morden in 1964. Ferris passed away April 7, 1966. This was a very lonely time for Mom. She worked at the Robinsons store and then looked after a family in Winnipeg. It was there that she met Adam (Bud) Chaytor and they were married August 18, 1973. They lived in Angusville, MB until Bud retired and they then moved to Morden. They enjoyed retirement going on little trips and enjoying family. Bud passed away January 8, 1994. Mom lived in the Tabor Units until moving into the Tabor Personal Care Home, October 24, 2013. Mom was predeceased by both of her husbands, her siblings, granddaughter Laura Mullin in 1990, daughter Hazel in 2006 and stepson Arthur Chaytor in 2013. She will always be remembered by her daughter Lillias (Herman) and family, son-in-law Darryl and family, step-daughter-in-law Arla Chaytor and family, sister-in-law Margaret Moloney, as well as many nieces and nephews. Cremation has taken place and as per Mom's wishes, a private graveside service has been held. If friends so desire, donations in lieu of flowers can be made in Mildred's memory to the Heart & Stroke Foundation of Manitoba. Wiebe Funeral Chapel, Morden In care of arrangements wiebefuneralhomes.com