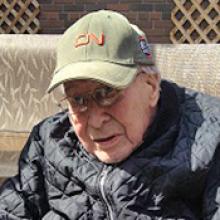 ALEXANDER (ALEX) OGSTON KINGHORN June 17, 1922 - September 12, 2016 So Far So Good Loving husband of Lilian; father to Malcolm (Shelagh) and Meredith (Jim); grandfather to Michelle (Devin), Christopher (Sheena), Sherry (Jay) and Amanda (Benoit); great-grandfather to Kobie, Kane, Carter and Kayleigh; uncle to Laurel (Doug), Jon (Susan) and Marilyn (Robert), and their families, passed away peacefully the morning of Monday, September 12, 2016 at the age of 94 years. Dad was born in Kamsack, Saskatchewan to William and Mary Kinghorn and spent his formative years living there. Once finished school, Dad started his working career with CN Rail in Kamsack working in the Yard. He had the opportunity to enter employment at the local Diesel Generating Station where he worked as an Operator/Mechanic. At this time he completed an ICS Diesel Mechanics course. Dad met Mom while working in Kamsack, through some mutual friends, and this started a relationship that saw them married in 1952 and took them through 64 years of marriage. Dad and Mom moved to Manitoba and Dad ended up working, for a short time, with Winnipeg Hydro at Pointe du Bois on the Tramway, again the trains. He then worked with Manitoba Hydro as a Station Operator at the Winnipeg River Generating Stations in Seven Sisters Falls and then Great Falls. He retired in 1986 with over 37 years of service. Malcolm was born first in 1955 and Meredith followed in 1957. Dad was deaf in one ear and he was also a shift worker, so for us growing up it was great. When he was on nights and sleeping through the day we did not have to "be quiet" as he would sleep on his good ear and we could, as kids do, make all the noise we wanted. One of his favourite breakfasts when he was working nights, so supper for us, was bacon and eggs. Dad had developed an interest in trains from his time with CNR in his early career and as such he was quite involved in the model train hobby, first with "O" gauge then "HO" gauge. His set ups were not super elaborate but were what he wanted and he spent countless hours "playing" with his trains. Dad was also very involved in the Masonic Order, Priory and the Shriners. This July he was presented with his 70 year pin, which he was extremely proud of. Dad and Mom always liked family holidays and as such we got to see a lot of Canada, again by train, as well as much of the north central States. In 1964 Dad and Mom bought a cottage at Whytewold, Manitoba, and for the next 40 odd years this was Dad's retreat. Having the cottage was his place away from work. We as kids spent many a summer out there, as did the grandkids, and were involved in many of his projects, making the place better. When Dad retired, he and Mom purchased a house in Lac du Bonnet, Manitoba were they lived very happily until 2013 when they sold the house and moved into Park Manor. It was not uncommon through the spring, summer and fall seasons to see Dad sitting on his patio outside the suite, dressed in his freezer jacket and CN cap, watching the world go by - one of his favourite pastimes. Dad was involved with the United Church in Seven Sisters and then Pine Falls and when they moved to Lac du Bonnet they became involved with the Anglican Church. Dad was a very loving and supportive husband and father who was extremely proud of his family and he will be missed. Alex's Funeral Service was held on Thursday, September 15, 2016 at 1:30 p.m. in St. John's Anglican Church, 86 McArthur Avenue, Lac du Bonnet, Manitoba with The Rev. Kenn Garrity presider. Wojcik's Funeral Chapels & Crematorium (Serving Beausejour), 204.268.2263 or 1.866.424.6271 www.wojciksfuneralchapel.com "Love you Dad / Poppa!"