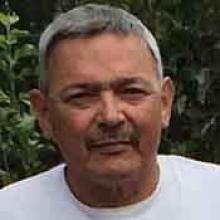 BARRY ALBERT WOOD 1957 - 2016 Barry Albert Wood, peacefully, on Friday, September 16, 2016 at the Boundary Trails Health Centre after a lifetime battle with Becker Muscular Dystrophy. Barry was born on May 2, 1957 in Winkler, MB and was baptized at the Bethal United Church in Roland, MB. He attended school at and graduated from the Winkler High School. Barry retired in June after being employed by Manitoba Hydro for 39 years. Barry enjoyed hunting, fishing, cruising around in his car and spending time at his cabin at Pelican Lake. Barry took a leadership role in Alcoholics Anonymous, where he set up and ran meetings. His kind and caring personality helped him to mentor others in dealing with their problems. Barry is survived by his children, Mark Wiebe and Rachel Wood, his mother, Dorothy Wood, sisters, Cheryl (Malcolm) Doney and Lynn Dueck, brother, Wayne (Kim) Wood, sisters-in-law, Doris Wood and Norma Wood, and many nieces and nephews. Barry was predeceased by his father, Earle in 1997, and brothers, Craig and Don in 2015. A private ceremony with close friends and family will be held at 11:00 a.m. on Wednesday, September 21, 2016 at Wiebe Funeral Chapel 1050 Thornhill St. in Morden. Donations in Barry's memory may be made to Muscular Dystrophy Canada, 825 Sherbrook St. #204, Winnipeg, MB R3A 1M5. Wiebe Funeral Chapel, Morden In care of arrangements wiebefuneralhomes.com