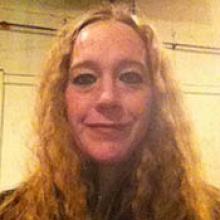 JEANNINE (JEN) RAPOSO It is with great sadness in our hearts that we say "until we see you again", to Jen who passed away suddenly but peacefully on Saturday, September 17, 2016 at the age of 41. Jen was predeceased by her mother Darlene Jones; maternal grandparents, George and Lena Cooper; paternal grandparents, John and Elizabeth Jones; and mother-in-law Korean Rice. Left to grieve her passing is Gordon Rice; son Christopher Raposo; Christopher's father Joe Raposo; sister Gina (Pat, niece Amalorya, nephew Jacyb); niece Andy (Daniel, great-niece Haley); nephew Michael Poirier; father-in-law Garry (Mavis), along with many extended family members. Jen was born in Brandon, Manitoba in 1975, to William "Bill" and Darlene Jones. She went to school in Brandon, Manitoba. She met and married Joe Raposo, and was blessed with the birth of her son Christopher. They lived in Florida for four years, before moving back to Canada. She often spoke of her time there and how she liked it. Jen lived a full, although short life. She loved her animals, dogs Cujo and Sara (her rescue dog), along with two cats Paws (whom she rescued) and Bella. She loved being out at Thomas Lake with her family, and loved her time spent with her son Chris. Her last 15 years was spent with her love Gordon, whom will miss her deeply. She had many plans. She often spoke of going to Mexico to visit her niece Andy. She loved her family deeply and had impacted all of our lives. In lieu of flowers, donations can be made to any animal shelter of your choosing. Funeral service will be held at the United Church in Carberry, Manitoba, on Friday, September 23, 2016 at 2:00 p.m. A final good-bye will be held at the Bield Cemetery on Saturday, September 24, 2016. White's Funeral Home Carberry, in care of arrangements 204-834-2629