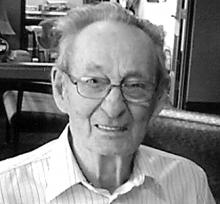 CHARLES HAVERSTICK Dad was born Saturday, October 24, 1925 in Domain, Manitoba, to Alice May and Charles Haverstick. He was the second oldest of four children and grew up in the small community of Domain. He helped out on the family farm while attending school at Osborne and Sanford and enjoyed playing hockey and baseball. Apparently when Dad got the puck and was heading down the ice, the guys got out of his way! He met Jean Brisson from Winnipeg and they were married on September 30, l950. They lived in Winnipeg for a while and Dad continued to farm and Mom worked at the T. Eaton Co. Two years later they moved to the farm and had their only child, Gloria. They had a mixed farm with cattle, pigs, chickens and grain and eventually downsized to just grain. Dad had no great love for the cattle, especially when those "hay burners" broke through the fence. Most of their life was devoted to work but he always had time for some baseball, board games, ping pong and pool and he was very competitive. He would let me get close and then close in for the win. He was a member of the Seed Clubs and enjoyed curling and skeet shooting with his friends in the community. Mom passed away in 1990 and Dad continued to farm with some help from his friend and neighbor, Jim Sim. Eventually, it became more difficult to work alone and he sold the farm in 1997 and moved to an apartment in Winnipeg. He enjoyed watching hockey (Toronto Maple Leafs) and baseball and doing crossword puzzles and he joined a seniors baseball team and played for one season. He drove to The Pas at Thanksgiving and Easter and in the summer but at Christmas he would ride the bus. His granddaughters, Amy and Kate, were always so excited to see Grandpa because that meant dusting off the board games and the crokinole board and he didn't let them win either! Eventually Dad moved to an apartment in The Pas to be closer to his family and he helped out on our farm whenever possible and always enjoyed the family celebrations. As Dad's battle with dementia worsened, he enjoyed looking at the old photos of his life and watching the Silver Screen movie channel. Dad passed away peacefully on Sunday, October 30, 2016 at St. Paul's Personal Care Home, The Pas, Manitoba, at the age of 91 years. He will be sadly missed by his daughter Gloria (Orson) Bestland; sister Audrey Marsh (Mike 2013); brother Malcolm (Sylvia); granddaughters Amy (Lance) Lintick and Kate; and great grandson Hayden. Chas was predeceased by his wife Jean, 1990 and sister, Gladys Manness, 2015 (Don 1981). In keeping with family wishes, cremation took place and a service of remembrance to celebrate Chas's life was held Friday, November 4, 2016, 1:00 p.m., at the Chapel of Hemauer Funeral Home, The Pas, Manitoba with James Hemauer presiding. Memories of the heart were shared by granddaughter Kate Bestland. Immediately following the service, a reception was held for family and friends at the Royal Canadian Legion Hall Club Room. A private family interment will take place at a later date in Domain, Manitoba. In lieu of flowers, donations to the Alzheimer Society of Manitoba, 10-120 Donald Street, Winnipeg, Manitoba, R3C 9Z9 would be appreciated by Chas's family. Hemauer Funeral Home and Cremation Services, The Pas, were in care of arrangements. For online condolences visit www.hemauerfuneralhome.com