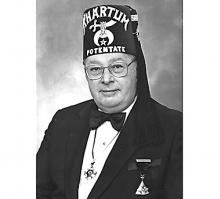 THOMAS WALTER SIDEBOTTOM July 28, 1929 November 26, 2016 Tom was born in St. Boniface Hospital and was a lifelong resident of St. Vital. He was predeceased by his brother George who fell in the Second World War, his father George and his mother Winnifred. He leaves behind wife Arla (nee Button); daughter Kathy and husband Kevin McCaw; son Thomas George and wife Jenia; daughter Diane and husband Cliff Roulston; and the apples of his eye grandchildren, Angela Pittman and husband Mike, Leanne Florence and husband Mike, Dana Sidebottom and Bryant and Anthea Roulston, and his great- grandchildren, Carter and Brooklyn Pittman. Tom had a multitude of occupations most notably Real Estate and Property Development and was thrilled to have a street named after him in St. Vital. He was a lifelong member of the United Church most recently Meadowood United, the Rotary and was passionate about his Masonic life being a Past Master of Three Pillars Lodge, a Past Grand Junior Deacon, a past TPGM of the Scottish Rite and a Past Potentate of Khartum Temple of the Shrine. He enjoyed his St. Vital Breakfast Club and the many friends he had from all aspects of his life most recently from Vic Wyatt House. He was always quick with a quip and a joke and was always willing to lend an ear and a hand. He was a raconteur of note and loved to spin yarns and tell tales of the adventures he had throughout his life. Memorial Service will be held Sunday, December 18, at 1:00 p.m. at the Neil Bardal Funeral Centre, 3030 Notre Dame Ave. (across from Brookside Cemetery). In lieu of flowers, donations in Tom's memory may be made to the Shrine Transportation Fund, 1155 Wilkes Ave., Winnipeg, R3P 1B9. NEIL BARDAL FUNERAL CENTRE 204-949-2200 neilbardalinc.com
Publish Date: Dec 10, 2016