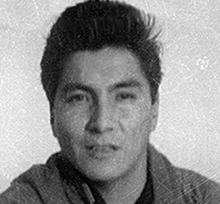 ALBERT (BERT) BRUYERE After a brief fight with pneumonia, on December 5, 2016 at the Victoria Hospital, Bert Bruyere passed away at the age of 77 years. Wake services will be held at the St. Alexander Roman Catholic Church Hall, Sagkeeng First Nation, MB, from Friday, December 9 to Saturday, December 10, 2016. Funeral Service will follow in the church on Saturday, December 10, 2016, at 2:00 p.m. Interment will be held in the Church Cemetery. Bert was from a very large family. He grew up in Sagkeeng (Fort Alexander). He was very intelligent. He attended residential schools in both Manitoba and Ontario. He enjoyed spending time with his friends and telling stories and jokes over a few drinks. He also liked listening to music, playing guitar, and singing. He taught himself how to drive, and earned his class one with no formal training. After returning from residential school, he married Caroline Prince and moved to Winnipeg, in search of opportunity, and to raise his family. Bert is survived by his wife Caroline, sons, grandchildren, great-grandchildren, siblings Lorraine, Terry (Bert), Sylvia, Viola, Bruce (Darlene), Chris (Delores) and Joan, in-laws Calvin, Annette and Elaine, numerous nieces, nephews, cousins, relatives and friends. He was predeceased by his son Kyle, his parents William and Angele Bruyere, siblings Joe (Cecile), Wilfred (Sophie), Ron, Lou, Toni, Alma, and Rose (Dave), in-law Russell Courchene. The family would like to express our gratitude to the staff of Poseidon Bay Care Centre as well as the staff at Victoria General Hospital, especially Dr. Heather Adam. Condolences may be sent to the family c/o Spirit Road Funeral Services Inc., PO Box 200, Fort Alexander, MB, R0E 0P0 204-340-6490 or friends may leave a message of sympathy at spiritroadfs@shaw.ca