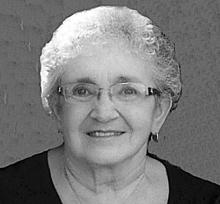 INEZ GRAY It is with great sadness that we announce the passing of Inez in a tragic auto accident on November 26, 2016 in Weslaco, Texas. Inez was born in Erickson, Manitoba on August 1, 1941 and lived there until she married her husband Tom Gray. They lived in many places across Manitoba as well as a short time in Ontario as Tom moved frequently with the Royal Bank. Inez worked for the Royal Bank, Hudson's Bay Company, St. Paul's Care Home and Woolco until they both retired 1994. Left to cherish her memory are husband Tom; daughter Debbie (Leo) Strid, grandchildren Nicole and Isabelle; son Duane (Keri) Gray, grandchildren Emma, Cullen and Xander; sisters Jean Shellborn and Ruth (Vern) English, brother Alan (Valerie) Soltys, brother-in-law Jerry (Pat) Gray, Aunt Vi Soltys, plus numerous nephews and nieces. Inez and Tom moved to Lake Metigoshe in 1994 and spent over 20 years there together. They spent winters in Magic Valley Park in Weslaco, Texas. Family was most important to Inez and she made sure they were taken care of. She enjoyed spending time at the lake playing cribbage with Tom, Debbie and Duane, family members and many friends. Inez had a passion for many things. She was always busy with crafts including crocheting, cross-stitching, knitting slippers, sewing and making jams and jellies. She had a caring heart for everyone, which you could see when she was around others. At her request, a private family service has been held with interment at the Erickson Cemetery. Minnedosa Funeral Service was in care of arrangements. (204) 867-3868