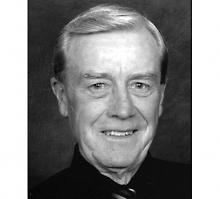 DONALD LINDSAY LUMGAIR 1938 - 2016 It is with heavy hearts that we announce the passing of our beloved husband, father and grandfather, Donald Lindsay Lumgair on Tuesday, December 13, 2016 at Boundary Trails Health Centre. He leaves to mourn his wife, Karen (Popkes); his son, Curt (Brandi), Darlingford; his daughter, Kathi Hamm (Don), Morden; his grandchildren, Wade and Chase Lumgair and Geoffrey Hamm. He is also survived by sister-in-law, Doris Lumgair; brother-in-law and sister-in-law, Dennis and Barbara Popkes; and his nieces and nephews. He was predeceased by his brother, Lyle; sister, Lorraine and her husband Abram Reimer and nephew, Adam Popkes. A celebration of Don's life will be held on Saturday, December 17, 2016 at 2:00 p.m. at St. Paul's United Church, Morden, MB. If friends so desire, donations in Don's memory may be made to the Boundary Trails Health Centre Foundation, Box 2000, Winkler, Manitoba, R6W 1H8. Wiebe Funeral Chapel, Morden In care of arrangements wiebefuneralhomes.com