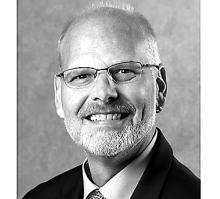 ANDREW BENJAMIN NICKEL 1965 - 2016 It is with heavy hearts that we announce the passing of our husband, father and son, Andrew Nickel on Wednesday, December 21, 2016. He leaves to mourn his passing his wife, Annette Bjorklund, his daughters, Madison (husband, Kyle Ross), Taylor (Rydell Reimer), and Sabrina, his son, Carson, stepson, Joseph Bjorklund, as well as his mother, Tina Falk, brother, Wayne, and his nieces and nephews. He was predeceased by his father, Benjamin and sister, Colleen Bueckert. Viewing will be from 1:00 p.m. to 7:00 p.m. on Wednesday, December 28 at Wiebe Funeral Home, 121 8th St. in Winkler. Funeral service will be held at 2:00 p.m. on Thursday, December 29, 2016 at Emmanuel Mennonite Church, 750 15th St. in Winkler. Private family interment to follow. If friends so desire, donations may be made in Andrew's memory to Katie Cares (ruth@katiecares.ca). Wiebe Funeral Home, Winkler In care of arrangements, 204-325-4201 wiebefuneralhomes.com