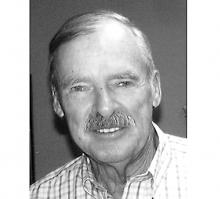 GARRY CLARK 1935 - 2016 With sadness the family announces the passing of Garry on December 21, 2016. He leaves to mourn with his passing his wife of 34 years, Olga, children Tom Clark (Joan), Lynne Clark-Johnson, Joan Clark (Greg), Sherry Ferguson (Ron), Budd Clark (Heidi), Mavis Wood, four granddaughters, three great-grandchildren, sisters Sheilah Land and Colleen Miller (Garry), aunt Mona Coleman, and nieces and nephews Garry was born in Holland, Manitoba moving to Winnipeg in the 1950s. He proudly became a police officer with the Winnipeg police force until his retirement in 1988. He then moved on to work at the Manitoba Legislative Assembly, eventually serving as the Sergeant-at-Arms until his retirement. Garry enjoyed a rural life with his wife, Ollie, gardening, working around the property and treasuring the magnificent Manitoba sunsets together. A Memorial Service will be held at Cropo Funeral Chapel, 1442 Main Street on Wednesday, December 28, 2016 at 1:00 p.m. In lieu of flowers, please donate to the charity of your choice. Cropo Funeral Chapel, 204-586-8044