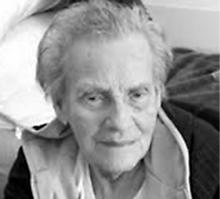 JOYCE MAUREEN MARYNIUK (LUNDQUIST) August 3, 1925 - January 3, 2017 Joyce Maryniuk, resident of Morley House PCH, Shoal Lake, MB, left this world to go to her heavenly home on January 3, 2017. Our mother was born to parents Emil and Ragna (nee Nesset) Lundquist in Hendon, SK. She was one of eleven children and she liked to tell us that she was born in a boxcar. Emil worked for the railway and that was the families' temporary home while waiting for a permanent one. Mom met our dad, Stan Maryniuk, when she travelled to St. Catharines, ON to join her brother Buddy, and to seek employment during the war. They were married on the farm near Rossburn, MB, then moved to Hamilton, ON where two daughters, Margaret and Bonnie were born. Three more children, Judy, Gerald (Jerry), and Robert (Bob) followed when they moved back to Manitoba. Joyce was a stay-at-home mother until later in life when she worked as a nanny in Winnipeg, and special teacher's aide, in Shoal Lake, MB when Dad retired to the area. Mom had a strong faith in God, relying on her belief in Jesus to get her through life's challenges. She was pleased to take part in water baptism at Grant Memorial Baptist Church in Winnipeg along with her oldest grandson, Roger Berrington. Joyce had an ear for music, played the guitar, organ and piano. She liked to sing along as she played. Mom liked family card games, knitting, sewing, reading, watching curling or baseball, keeping score during the World Series. She was especially happy to spend time with her family members and took trips with Dad to Garrick, SK, which she called home. She loved her children and grandchildren, and "greats", wanting the best for each one. Joyce was predeceased by her husband, Stan Maryniuk in 2006, two sons-in-law, Cyril Berrington in 1993, Gilbert Brandson in 2002 and grandson Steven Maryniuk in 2013. Remaining are her five children: Margaret Berrington Axent (George), Bonnie Roesch (Bill), Judy Brandson, Jerry Maryniuk (Sharon), Bob Maryniuk (Alice), grandchildren and greats, two brothers: Stuart Lundquist (Irene) and Art Lundquist (Mary) and sisters-in-law, Elsie (Taphorn) Brown, Terry Lundquist and Joyce Lundquist. The funeral service will be held on Tuesday, January 17, 2016 at 1:00 p.m. at the Shoal Lake Baptist Church with Rev. Wendy Thom officiating. Interment will follow at St. Josaphat's Ukrainian Catholic Cemetery, Shoal Lake with Father Mykhaylo Khomitskyy officiating. Rest in peace Mom. We love you. Rae's Funeral Home, Shoal Lake, MB, in charge of arrangements. (204)759-2160