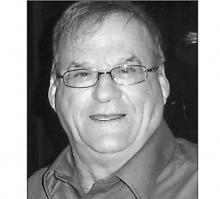 CLAYTON GARY THOMPSON After a long courageous battle with cancer the greatest husband, dad, granddad and friend in our lives passed away. Clayton Thompson passed away at home, with his family by his side, on Saturday, January 7, 2017. He was born October 20, 1942 in Boissevain, MB. He was born with trucking genes. Trucking was his passion. He started driving at a very young age for Hammond Transport in Boissevain. Then for Prairie Freighters out of Killarney. This is when he met Kathy, they were married in 1966. This is when he and his brother purchased Hamiota Kenton Transfer. He worked there until they sold the business to Gardewine Transfer in 1995. Then he pursued trucking again with Greg Gerrard and then went to Double B Enterprises at Kenton. In 2004, he went to Russell Redi Mix where he thoroughly enjoyed working and the friendships he made. Finally, in 2013 he drove the school bus for a few years. He loved the kids. Clayton was the most genuine, compassionate, hard-working man who always did above and beyond in his journey in life. Clayton was ever so thankful to the Lions Eye Bank as he was given two corneal transplants. It was this thankfulness that drove him to devote as much time as he could as a member of the Hamiota Lions Club and he participated in the Lions Journey For Sight for many years. He and Kathy enjoyed travels to California, Memphis, Florida, Mexico, Hawaii, and Jamaica. He leaves to mourn his passing the love of his life Kathy; daughter Karen (Neil), grandchildren Conor and Larissa; son Jeff (Bev) and Bev's children Carl (JLee), Thomas (Chelby), and Carson. He was truly a loving and generous person with an infectious smile and has left a void that cannot be replaced. A service celebrating Clayton's life will be held at the Hamiota Community Centre, Hamiota, MB on Saturday, January 14, 2017 at 3:00 p.m. with interment following in the Hamiota Cemetery. In lieu of flowers, donations may be made in Clayton's memory to CancerCare Manitoba, PO Box 2248 Stn Main, Winnipeg, MB R3C 9Z9; to the Lions Eye Bank, 320 Sherbrook St., Winnipeg, MB R3B 2W6; or to a local charity of one's choice. Messages of condolence can be shared at www.campbellfuneralhome.ca Campbell Funeral Home, Hamiota are in care of arrangements. (866) 620-2744