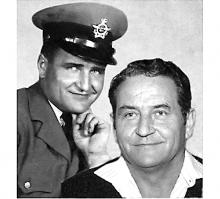 HERMAN J. RUSCH Herman Rusch, born November 7, 1933, at the Rusch family farm (Linde), Gonten, Appenzell IR, Switzerland, passed away December 28, 2016 at the Brandon Regional Health Centre. Survived by his wife, Julia, sons, Sam (Leanne) and Ben (Florence), and grandson, Shane. Herman came to Canada as a cheese maker, working in Montreal and Campbellford, Ontario. One for adventure, he joined the Royal Canadian Regiment (RCR Airborne), when cheese making did not work out. He later joined the Royal Canadian Air Force and served as firefighter crash crew. Herman was a proud Canadian, and served with honour in the military for 25 years, on various bases including 2 Fighter Wing, R.C.A.F. Station Grostenquin, France, CFB Trenton, CFB Bagotville, concluding his military career as fire chief at CFS Barrington in 1981. Herman retired from firefighting at CFB Shilo after serving as a civilian Crew Chief for several years. Herman was a beer aficionado, cheese connoisseur, bird lover (especially the Toronto Blue Jays), and a life-long learner with broad interests covering history, politics, aviation, and natural science. He was a firm believer in the rights of the individual. Special thanks to the nurses and staff of Brandon Regional Health Centre 4th floor. A celebration of Herman's life will be held with family and friends in late spring or early summer. We love you. Messages of condolence may be placed at www.brockiedonovan.com. Arrangements were in care of Brockie Donovan Funeral & Cremation Services, Brandon, (204) 727-0694.