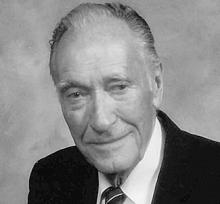 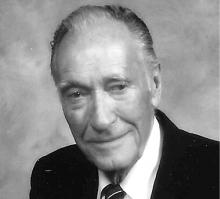 RAYMOND CLEAVE DAVIS After living a long and full life, Raymond Davis passed away peacefully on Monday, January 9, 2017. A memorial service will take place on Wednesday, January 18, 2017 at 2:00 p.m. at Chapel Lawn, 4000 Portage Avenue. Flowers are gratefully declined, if friends so wish a donation may be made to the St. James Assiniboia Scholarship Foundation or a charity of choice.
Publish Date: Jan 16, 2017

RAYMOND CLEAVE DAVIS After living a long and full life, Raymond Davis passed away peacefully on Monday, January 9, 2017. His memory will be cherished by daughters, Shauna Selci, husband Mike, and daughter Glennis Wittenberg, husband Eric. He will be sadly missed by his five grandchildren Kendall, Erin, Samantha, Jayden and Cameron who lovingly called him "Papa". Raymond was predeceased by his loving wife Thelma in 1999 and by his parents Arthur and Margaret Davis, brothers Albert and Haldane. Dad was born at Manor, Saskatchewan where he was raised on the farm until the age of fourteen. The family then moved to Alexander, Manitoba. Dad often spoke of the time the family camped out 20 miles west of Virden, Manitoba beside the Little Saskatchewan River on July 1 of that year. He drove a team of horses from Manor to Alexander, a huge responsibility for a young boy. Alexander was on the main line of the Canadian Pacific Railway which thrilled Dad because of his interest for steam locomotives and trains in general. Dad moved to Winnipeg in 1943 and began work at McDonald Brothers Aircraft, working at securing parts for assembling airplanes that were being overhauled. In 1946 Dad enrolled in Normal School and obtained his teaching certificate. In August of 1947 he started his teaching career in The Pas, Manitoba. During his time at The Pas, Dad met Mom and they were married on August 2, 1950. In 1953 they moved to Winnipeg as Dad had accepted the position of Principal at Bannatyne School, in St. James. After five years, he was appointed Principal at Jameswood School and in 1967 became Assistant Superintendent of St. James School Division. After amalgamation with Assiniboine North #2 and St. James #7 he became Superintendent of Elementary Schools, Area Superintendent and Superintendent of Program and Curriculum Evaluation. Most of Dad's years at the School Board Office were spent as Elementary School Superintendent. He retired in 1979 and was very proud of the fact that he had a "knack" for hiring good staff. Dad spent 43 years in the family home on Amarynth Crescent in St. James moving to Sturgeon Creek Retirement Residence in 2007. He was one of many long-time St. James residents residing there, who are fondly known as "Creekers", after a life time of living by Sturgeon Creek. Dad had many interests over the years; including hunting, fishing, curling, bowling and trap shooting. He was also an avid wood worker and artist which continued throughout his life. He and Mom also enjoyed Square Dancing for many years and travelled extensively. He was a loyal Saskatchewan Rough Riders fan, loved watching NHL Hockey, and always cheered on the Toronto Blue Jays during baseball season. Dad was a devoted husband and an exceptional father and grandfather. He was a true gentleman and scholar with a keen intellect. He will be dearly missed. A memorial service will take place on Wednesday, January 18, 2017 at 2:00 p.m. at Chapel Lawn, 4000 Portage Avenue. Flowers are gratefully declined, if friends so wish a donation may be made to the St. James Assiniboia Scholarship Foundation, 2574 Portage Avenue, Winnipeg, Manitoba, R3J 0H8 or a charity of choice. Do not stand at my grave and weep I am not there; I do not sleep I am a thousand winds that blow, I am the diamond glints on snow, I am the sun on ripened grain, I am the gentle autumn rain. When you awaken in the morning's hush I am the swift uplifting rush Of quiet birds in circled flight. I am the soft stars that shine at night. Do not stand at my grave and cry, I am not there; I did not die For those who wish to sign the online Guest Book please visit our website.