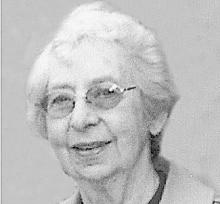 JOSEPHINE MARY GRANT (nee COE) 1928 - 2017 It is with sadness, we announce that Jo passed away on Sunday, January 22, 2017 at the Tabor Home in Morden, Manitoba. She was born in London, England. At the age of 12, she and her younger sister were evacuated from England to escape the aerial bombardment of England during the Second World War. She came to live in Winnipeg under the guardianship of the Dafoe family, until her parents were able to emigrate to Canada. Jo remained in close contact with the Dafoe family throughout her life. Jo received a Bachelor of Arts degree from the University of Manitoba in 1950. After this, she worked at the Elizabeth Dafoe library at the U of M for many years and volunteered with the Age and Opportunity Bureau of Winnipeg. She was predeceased by her husband Dave in 1975 and leaves behind her son Bill Grant of Morden, Manitoba and her daughter Brenda Bohn of Prior Lake, Minnesota; two grandchildren that she cherished, Jaimie in St. Paul, Minnesota and Drew in Boulder, Colorado and sister Valerie of Tsawwassen, BC. Jo passed peacefully after she received goodbye messages and blessings from each of her children and grandchildren. She will be greatly missed. The family greatly appreciates the compassionate care she received from the staff of the Tabor Home in the last year of her life. There will not be a service. In lieu of flowers, donations in Jo's memory may be made to the Alzheimer Society of Canada (www.alzheimer.ca). Wiebe Funeral Chapel, Morden In care of arrangements wiebefuneralhomes.com