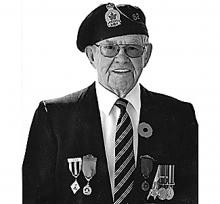 JOHANN (J.T.) ARNASON 1921 - 2017 Johann (J.T.) Arnason was born in Gimli, Manitoba on March 15, 1921, and it was there, on January 26, 2017, that he peacefully left us, after living a rich and full life. We know that he's in good company now joining the love of his life, Elin (Diddy), siblings: Valdi, Olaf, John, Herman and Gordie, and other family members and close friends. Joey made the most of his 95 years on this earth, and the details of his amazing life far exceed what we are sharing. After serving in the navy during the Second World War on the HMCS Digby, he worked on a ship on the Mackenzie River and fished before returning home in 1945 to marry Diddy, his wife of 59 years. They welcomed their children, Brian, Robert, Kenny, Debbie and Susan, and later their daughters and sons-in-law: Dorothy, Ruth, Judy, Nick and Larry into their lives and hearts. They were the best grandparents possible to Raegan (Andre), Carmen (Scott), Jenna (Dave), Brett, Ashton, Mackenzie, Erik, Luke, Donna (Curtis), Sharon (Stewart), and great-grandparents to Ryan, Lewis and Rachael. He leaves behind siblings, Anna, Elin and Freddy, and many family members. Joey was a Gimli institution and local legend. He gave his heart, his help and his time unselfishly. He helped build the first Gimli Legion, and was a founding, charter and life member. He was 1st Deputy Fire Chief for the Gimli Fire Department and received a 25 year service medal. He was a Past Master of the Viking Lodge #175, President of the Interlake Shrine Club and a member of the Khartum Komedians. He served as President of the Old Timers Reunion Ball, Councillor of the Town of Gimli, and was a School Board Trustee and Chairman. Joey was a huge sports fan. He was Chairman and a life member of the Gimli Curling Club and an honorary life member of the Manitoba Curling Association. He was a longstanding season ticket holder for the Winnipeg Blue Bombers. There was nothing he enjoyed more than watching a football or hockey game. He juggled several careers early in life. He was an accountant/bookkeeper at Betel Home Foundation and an Insurance salesman at Monarch Life Assurance. He did this, as well as open Tip Top Foods in 1946 with his brother Valdi. He retired from Tip Top after 35 years and left it up to his sons, Kenny and Brian, to carry on his legacy. Joey continued to be a daily fixture at Tip Top well into his 90s. His sons kept the store going for 40 more years before retiring themselves. The store was sold after 75 years as a family business. Joey loved the outdoors! Fishing, gardening, beekeeping and sitting on the beach sun tanning were his favourite things to do. Age was just a suggestion to him and in his 80s he bought a scooter and could be found cruising all over Gimli. He enjoyed the company of several pet birds, all named Willie, and they would sit on his shoulder while he sang along to Johnny Cash. He was proud of his Icelandic heritage and encouraged us all to celebrate the Icelandic culture. He came from a large, very close family and he instilled the importance of family into his own children, grandchildren and great-grandchildren. He is our sunshine, our hero, and we will think of him the most when we're all together. Our family would like to thank the staff and nurses at Betel Home Foundation for their care and support. A celebration of Life will be held on Thursday, February 2 at 2:00 p.m. at the Gimli Lutheran Church with a reception to follow at the Gimli Legion. In lieu of flowers, donations may be made to the Westshore Foundation, Betel Home Foundation, or a local Gimli charity of your choice. Goda nott og dreymi þig vel, elskan NEIL BARDAL FUNERAL CENTRE 204-949-2200 Gimli 204-642-7124 neilbardalinc.com