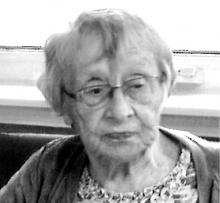 KATHLEEN DYCK 1922 - 2017 It is with great sadness the family wishes to announce that Kathleen Dyck passed away peacefully at the McCreary / Alonsa Personal Care Home on January 26, 2017 at the age of 94 years. She was born October 4, 1922 to John and Mary (Reimer) Dyck in Morden, MB. As a youngster, her family moved to McCreary where she resided until her early 20s when she moved to Winnipeg. With the early passing of her mother at age 12, her sister Marion and Kathleen helped to raise her younger siblings and help their dad with the house and farm. She began her life journey in Winnipeg doing housework, then moving on to work in a sewing factory. She continued with her high school education and then obtained a clerical certificate and began her administrative career working for the Federal Government in the Armed Forces division. She returned to McCreary in 2009 to be near her family for support and care due to her failing health. Throughout her life, Kathleen was actively involved with volunteer work through the Young United Church in Winnipeg, the Winnipeg Sketch Club and her art work. She had an artistic flair and the artistic temperament and has many beautiful paintings to substantiate her passion. Family was very important to Kathleen and she spent many of the holidays visiting in McCreary as well as spending time with her extended family in Winnipeg and around Manitoba. Her other passions included politics, she was a staunch NDP supporter, playing cards, travelling around the province sketching the variety of landscapes, animals or whatever caught her eye for her next painting. She was predeceased by her parents, her sister Marion, her brother John Dyck and sister-in-law Lorraine (McLauchlan) Dyck, her sister Rita Billington and brother-in-law Wes Billington, her brother-in-law Bob McLuckie and great-nephew Justin Roy. She will be greatly missed by her sister Millie McLuckie of McCreary, nieces Coreen (Tom) Roy, Sherry Dyck, Debbie (Lawrence) Barnard, and Faye Billington, nephews Garth (Marion) Dyck, Brent (Mary) Dyck, Glen Billington, Jack (Birgit) Billington, Ernest (Sandra) McLuckie and Don McLuckie, as well as many great and great-great-nieces and nephews, cousins and extended family. A Celebration of Kathleen's life will be held on Friday, February 3, 2017 at 1:00 p.m. from Knox United Church, McCreary with interment in the McCreary Municipal Cemetery Should friends so desire, donations may be made in memory of Kathleen to the McCreary / Alonsa Personal Care Home, the Alzheimer Society of Manitoba, The Salvation Army Canada West or to the Mennonite Central Committee. Sneath-Strilchuk -McCreary Chapel 204-835-2004 www.sneathstrilchuk.com