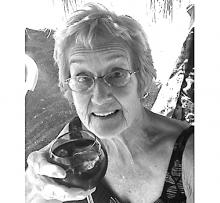 RITA JOANNE WASSLEN "I am she who doing something for someone else makes me happy" Rita Joanne Wasslen entered into eternal peace on Sunday, January 29, 2017, at the Binscarth Curling Rink. Rita was born on June 20, 1938, to Florence and Gordon Orr. She married Harold Wasslen, her loving husband of 55 years, on April 29, 1961. They had three wonderful daughters before she began a lengthy career as a Lab and X-ray Technician in the Birtle and Russell communities. Rita retired to devote her life to her family and her community. She is survived by her husband, Harold; her three daughters, Brenda (Bob), Carol (Byron), Diane (Trent); 10 amazing grandchildren, Tanya (Keith), Drew, Dayne, Amy, Hanna, Tamara, Tori, Kianna, Emma and Reece; her brothers, Stan (Joy), Jim (Mary), as well as many other loving in-laws, nieces, nephews and family members. She was predeceased by her parents and her brother Bill. A prayer vigil will be held on Thursday, February 2, 2017, at 7:00 p.m. from St. Joseph the Worker Roman Catholic Church, Russell, 332 Augusta St. E., Russell, MB. Her life will be celebrated with a funeral mass at St. Joseph the Worker Roman Catholic Church, Russell, MB, on Friday, February 3, 2017, at 10:00 a.m. with Father Norberto Monton officiating. Interment will follow in the Binscarth Cemetery at a later date. If friends so desire, donations can be made in Rita's memory to the Binscarth Park and Pool, P.O. Box 205, Binscarth, MB R0J 0G0. Remembrances and condolences can be emailed to braendlebruce@mts.net. Grief is the price we pay for love. (Queen Elizabeth II) Braendle-Bruce Funeral Service, Russell, Manitoba are in care of arrangements (204) 773-2747.