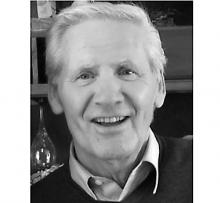 THE HONOURABLE JUSTICE DANIEL PATRICK KENNEDY 1939 - 2017 Dan Kennedy passed away peacefully, with family at his side, the morning of Saturday, January 28, at ActionMarguerite - Tache. Dan was loved dearly and his memory will be greatly treasured by his wife Carol Joan Kennedy (nee Johnson), his children Joanne (Pierre Cardinal), Kevin (Nadine Kennedy), Paul (Kelley Kennedy), Jennifer (Jason Busch), Ryan, and Derrick (Naoko Kennedy), as well as his 18 grandchildren, Sara (fiancé Brad), Maura, Marc-Andre, Marie-France, Zachary, Keenan, Quinlan, Riley, Curtis, Alexandra, Amy (fiancé Russell), Jordan, Rickie, Kendal, Tyler, Kaitlyn, Zen and Luca. He also leaves to mourn his sisters Judy Hansen (Gary), Eileen Jones (Julien), Kathy Heroux (Richard), and many nieces and nephews. Dan was predeceased by his sister Margie, mother Agnes, father Frank, sister Patricia and brother-in-law Leo Soenen; also passing before him, were his brother-in-law Terry Johnson, mother and father-in-law Carl and Nora Johnson, as well as his niece Colleen Johnson. Born in Winnipeg Manitoba, Dan was the only boy in a family of six children. He grew up in Norwood and attended Holy Cross School. Fair haired Dan had a winning smile and charmed many hearts throughout his life. He often recounted stories of working his paper route, serving Mass and working as a night watchman at Burns Meats in his late teens. Educated in the Jesuit tradition, he truly was a man for others. He attended St. Paul's High School where he was active in basketball and wrestling and served on the student council, graduating in 1957 and thereafter continuing as an active alumnus. He moved on to St. Paul's College and graduated with a law degree from the University of Manitoba. Riding the bus in 1962, Dan happened to spy Carol Joan, a pretty young gal he remembered from St. Mary's Academy. A romance blossomed and over 50 years of happiness, love and laughter were set in motion. Dan was a good man and loving father. He was devoted to family, guiding his six children through teenage years, life decisions and adulthood. In 1965, Dan was called to the Manitoba Bar. He began a successful career as a lawyer and eventually became partner with the firm Christie DeGraves, Mckay, and Settle. He earned his reputation offering good counsel. He believed that every person had the right to be heard in the courtroom. Federally appointed a judge at the age of 38, he was one of the youngest judges at the time. In 1984, he was appointed to the Court of Queen's Bench of Manitoba. In addition to his duties in Manitoba, Dan took on the responsibilities of Circuit Judge in the North, travelling to Nunavit and Baffin Island where he garnered a great respect for the Inuit of Canada. He believed in giving his time to the community. As a young lawyer he was a member of the Serra Club, Chairman of the St. Vital School Board, gave his time to Marymount School and served on the Misericordia Foundation Board. He served on the advisory board to St. Paul's High School, was Chairman of the Parish Board at Christ the King Church, served the Catholic Foundation and many other community groups. Dan also served as President of the Canadian Judicial Association and was actively involved in various think tanks for the Canadian judiciary. Dan had a love of golf, music and long drives with Carol. Family was important and the family table was a special place. It was there that Dan passed along his values, telling stories of what he saw in his daily life, engaging his children in prayer, conversation and debate. Muriel Lake was another special place for Dan, a place to disconnect, joke around, enjoy his grandchildren, and of course soak up the sun. As the family grew and his children spread their wings, he happily travelled coast to coast to be with them, watching his expanding legacy of grandchildren. As he neared retirement, he and Carol had the opportunity to travel to England, Ireland, France, Spain, Portugal and Japan. The family was blessed to have Dan in the last decade. Health hurdles presented significant challenges. During his 60s he survived a quadruple bypass, 10 years ago he survived the West Nile Virus and in January 2011, he lived through a devastating head injury while in Mexico. Despite these challenges, Dan met life with his cheery smile, dignity and grace. And his wife, children, grandchildren and family are grateful for every moment they spent with him. The family offers special thanks to Dr. Kevin Coates and to all the staff at ActionMarguerite-Tache, for their care and support to Dan. Prayers will be held on Thursday, February 2 at 6:00 p.m. at Christ the King Roman Catholic Church, 847 St. Mary's Rd. Mass of Christian Burial will be celebrated on Friday, February 3 at 12:00 Noon also at the Church. Interment will be at St. Vital City Cemetery. In lieu of flowers, the family asks that donations be made to: The Catholic Foundation of Manitoba, http://www.catholicfoundation.mb.ca/ or to St. Amant Foundation, https://stamant.ca/foundation/contact/ CROPO FUNERAL CHAPEL 204-586-8044