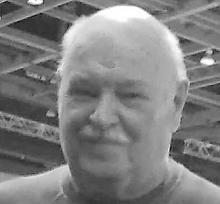 HARRY FRANK POPOFF February 9, 1941 - February 1, 2017 It is with deep regret that the family wishes to announce the passing of our father, husband, grandfather, great-grandfather, uncle and godfather. It is with great relief in our hearts that he graduated from life and is free of the pain of pancreatic cancer. He will be sadly missed by his wife Vivian; sons, Cal (Cindy), and Greg (Corinne) and grandchildren, Taylor, Cole, Sarah, Bethany, Rebecca; great-grandchildren, Ava and Brody, and granddog Wiley. Harry was born in a farm house near Benito, MB. to Frank and Helen Popoff where he grew up with his brothers, Bill, Jack and sister Nettie. Throughout his teen years he enjoyed being a member of the Rythym Rocks as a fiddle player playing numerous barn dances and weddings. The height of his fiddle career peaked on television with a few appearance on "Profile" in Yorkton, SK. Upon graduation from High School he made his way to Winnipeg in 1959 where he came upon the love of his life on October 31 of the same year. In October of 1960 Harry and Vivian were married and for the last 56 years enjoyed wedded bliss. During this time dad worked at various jobs before finding his way back to the country to work as a grain buyer for Searle Grain, Federal Grain and finally Manitoba Pool. He operated elevators in Birch River, Endeavour, Runnymede, Angusville, and La Riviere. He was always very fond of the people he met along the way and became very respected as an agent and community member. In those fun and exciting Angusville years he along with other members of the community sponsored the construction of the Angusville Community Center where his name still proudly appears on the plaque along side of the other founding members. He later shifted careers to Manitoba Crop Insurance as an agent in Birtle and later in Stonewall where he became a regional manager and retired in 1995. During his time with Crop Insurance he enjoyed many great relationships with work collegues and especially loved working with the farming community as he always felt like the prairie boy that he was. During the 1980's in Stonewall he (along with Rudy Peters) started the Quarry Toastmaster Club. Recently in the last few years the Quarry Toastmasters Club celebrated a 25 year milestone where he was honored to be recognized as a founding member. Not one to sit around in retirement he later joined Canadian Auto Group/Adesa Auction. During his 20 years as a core driver, he enjoyed building many friendships with his fellow drivers and especially with Jaret Thiessen whom he held in very high regard. He enjoyed many long conversations during extended trips with his work buddies and always came home with humorous stories. He loved nothing more than sharing laughs with all his dealership friends throughout the prairies. Eventually in January 2016 he retired a second time to care for Vivian and to spend more time with family. In August he received the unfortunate diagnosis and started his courageous battle with dignity and always maintained a positive attitude and sense of humour. He always spoke highly of Dr. Daeninck and the rest of the staff in St. Boniface CancerCare as well as compassionate staff at the Gimli CancerCare where he took his chemo treatments. The family would also like to thank the staff at the Dr. Evelyn Memorial Hospital in Stonewall for a great care shown towards dad during his final days. Your compassion was extraordinary and thank you doesn't seem to be enough. As per dad's wishes, there will be no funeral and a private interment will take place in the summer at Semenovka Cemetery along side his parents and grandparents. Dad had a strong belief in God and knew that one day he would be reunited with family and friends that have passed before him especially his old buddies Adam Sawaryn and Bill Strukoff. KEN LOEHMER FUNERAL SERVICES IN CARE OF ARRANGEMENTS 204-886-0404